Taking a Walk Down Memory Highway

Labels: family, life up North
We're getting my parents' house ready for sale, and my mom had to confess that she has every check she has ever written boxed up in the garage.  Not to mention every light bill, tax return and pay stub.  Check out this receipt for gas:  8 gallons for $3.05.  In 1970. 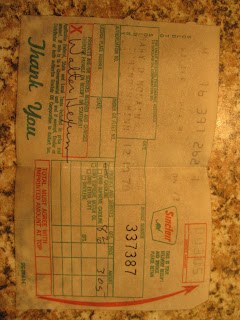 Maybe Kim was their favorite daughter back when she was their only daughter.  Because apparently they bought her this bike, and it must have been brand new to come with an owner's manual like that: 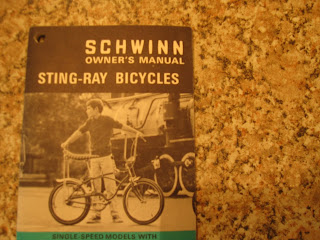 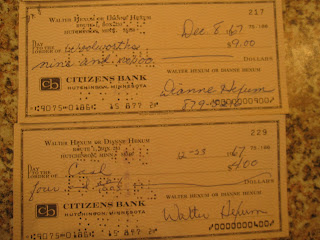 It might seem like my mom's house is filled with crap and junk, but it's really not.  All this info was neatly organized into boxes in the top of the garage: 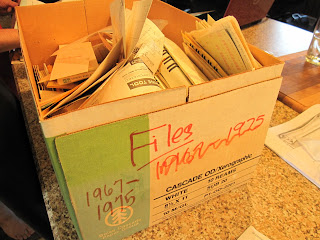 Oh, and I remember as a kid (during the I-wish-I-was-a-hippie-in-the-60's-phase) asking my parents if they went to Woodstock.  My mom laughed and told me they were too busy having kids and being married and p.s. they had no interest in such a thing.  Out of curiosity, I looked up the dates for the original Woodstock and found the corresponding dates for checks my mom wrote.  Yes, they were at the grocery store.  National Foods, $5.00 on August 19, 1969 and Red Owl, $30.33 on August 20, 1969.  Too busy having kids and being married was right. 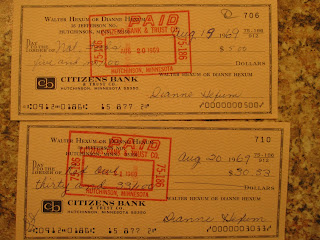 And how did they afford such exorbitant grocery bills?  By these insane pay checks, of course:  To save you from doing the math...that's $3.41 an hour! 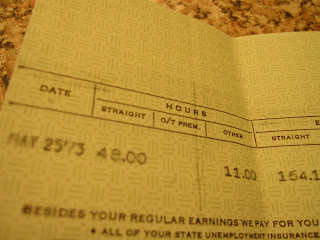 OH, and here's where they bought a 1967 GTO and put up the household goods and appliances, (now owned or heretofore acquired) as collateral: 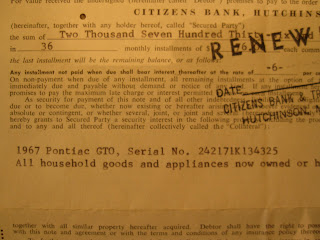 This isn't very fun for my mom and she's apprehensive about burning all of this stuff.  "43 years of my life..." something like that. 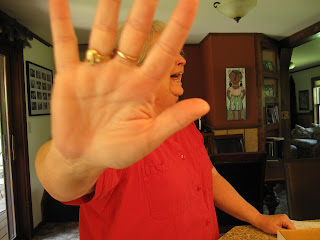 We're burning all of the 1967-1975 records, but we're glad we went through all of it first.  Not only for laughs, but also here is the tiny baby bracelet that my brother Scotty wore when he was born. 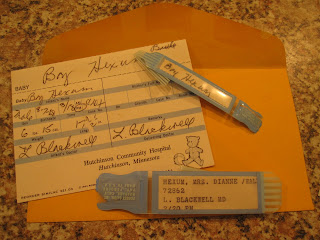 This makes me want to start archiving all my miscellany too!

Is she one of "those" hoarders?

Kady the reason why they had to get gas in Dec 1970 (note the receipt at the top of your montage of memories)was to take me somewhere (in the twelfth month of my life)special. Maybe I am the favorite daughter. }-!