New to A Lady Reveals Nothing?  You've missed SO MUCH.  Not to worry.  Every Sunday, I dig through the archives to repost an old favorite.  Mostly because I'm too lazy to come up with new content every single day.  Enjoy!  This story first appeared on March 19, 2010:

While traveling in New Zealand, my friend Teri and I stayed with the most adorable couple, Henry and Marion.  They're in their 70s and I just loved them.  So much so that after Teri went home, I stayed an extra week.  I was determined to be a good guest and so I told Henry one day that I would help him with any chores that needed to be done.

He asked me to accompany him on his errands which included a trip to the dump.  Mind you, the garbage man comes to Henry's house, and so does the recycling man.  In fact, they had just been out that morning.  But that wasn't good enough for Henry.  He wanted to deliver his own garbage and recycling.  And now I totally understand why!

We parked outside the glass area, and chucked each and every bottle individually into it's proper bin (brown, green, clear).  He reckoned I couldn't throw very well and so I had to try it.  It was so fun to break all the bottles.  Here is Henry tossing his bottles: 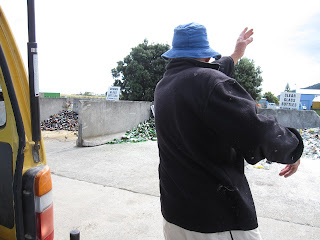 This one was mine:
(Henry said, "get out your aggressions, Hexum") 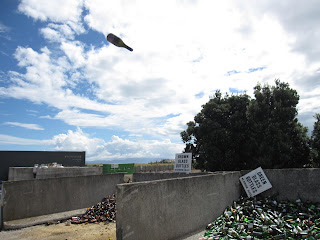 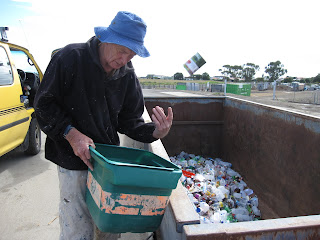 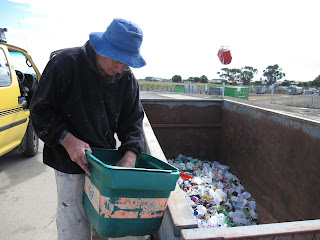 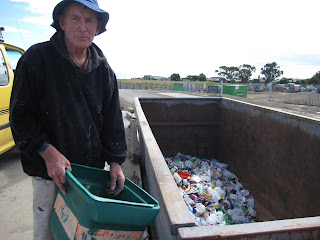 This pile of crap was home to the four gas refridgerators that Henry pinched and fixed up. Three went up to their cabin (bach) and he gave the other one away. 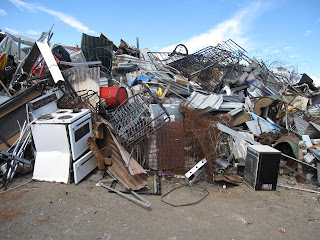 Then he brought me to the Foundry where he worked for many years. We got to see them melting steel and pouring it into moulds! And then of course we were kicked out for safety reasons. But then Henry talked to the guy for a while and convinced him to take us to an even better viewing spot and I got some pictures. 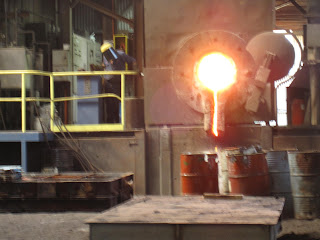 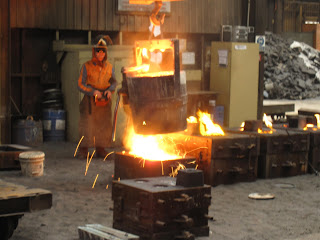 They made some of the Regata Sailboats here in Thames that were in a famous sailboat race in the States. Sorry, can't remember which one.  How interesting!

Henry is so full of pluck I tell you, he's always joking around. So anyway after our trip to the dump I did get a chance to help him lift some heavy bags filled with sawdust up into a truck. He had jumped up into the truck and I was handing him the bags. I found a bag that looked like it was completely full, but it was super light and so there must have been something different inside it than all the other bags. Anyway, I saved it for almost last and then pretended that the big bag was super, super heavy with my awesome acting skills and then he looked at me like I was so stupid for trying to lift something so heavy, and even coached me on how to hand it to him. He got prepared to lift a very heavy bag and when I let go he gasped!  The light-as-air bag went flying.  I got him! And then he threw it at me.
Posted by A Lady Reveals Nothing at 7:00 AM