Last night our home hockey team, the Broncos go to state with a score of 7-1 that brought them there.  Grand Rapids is in the dust!

Jena and I were supposed to fight on Saturday and I think she chickened out she said I was chicken and that I never showed up.  I was there for 40 minutes!

My mom finished my new dress.  It's white with torquoise polka-dots there are buttons down the front and there are three ruffles.  The top one and bottom are solid torquoise and the middle one is polka-dots.  I'm wearing it to Shawna's wedding.

Q.  Why did the buger cross the road?
A.  He was being picked on

A man from Fort Francis, Canada drove all the way down to Omaha, Texas.  When he got there, there was a sign that said Omaha Left  *arrow pointing left*.  So he turned around and went back to Canada.
HA!HA! 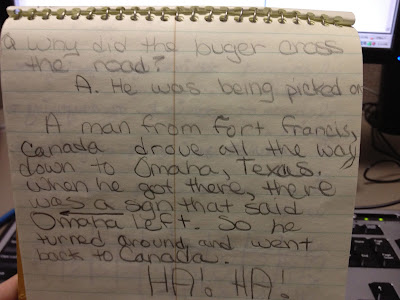 OMG...I can't believe you set up a meet for a fight! Jena who? I didn't realize you were so bad ass..if I had known this I would have never thrown you in the garbage.

Jena Anderson I believe. We had an inexplicable rivalry in 6th grade...I'm going to get to the bottom of it. Stay tuned for more journal entries.

p.s. I think I write about you throwing me in the garbage.

You little fighter, you! I wish I wasn't so timid as a youngster ;)

Where was Jena supposed to meet you for the fight, and why schedule the fight on the weekend? She prob had plans out of town. Maybe would've been more convenient for both of you to schedule it right after school,

We were supposed to meet by the dumpsters, as I recall.