One Time, on the Band Bus 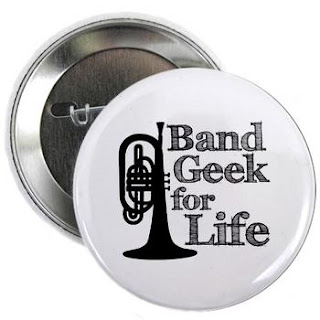 Back in 8th grade, we band kids had to take a bus from the high school over to the middle school for band practice.  My buddies at the time were Tara and Beth and we had lots of adventures on that bus.

For example, one day we got it in our heads that we were going to play a mean mean joke on our other friend Petrina.  It was brilliant.  You see, the high school sold tampons and pads that came in cardboard boxes for 25 cents.  Well, the middle school had machines that sold them for 10.  So the three of us brought every single dime we could find to school one day and Tara brought her backpack to band and we completely filled it up.  The plan was that we would fill Petrina's locker so full with pads and tampons that when she opened it they would all fall out and she would be embarrassed and everybody would think she had her period!  (p.s. that plan went off without a hitch.  In fact some of the pads slid across the hallway into the senior Accounting class.  Success!)  What a bunch of bullies.  Anyway, we got the pads and tampons and on the bus on the way back to the high school I loudly asked Tara what was in her backpack.  "NO." she glared at me, begging.

"Seriously, what's the backpack for Tara?"

Beth and I were dying and so was Tara but not from laughing when I opened her backpack and showed the whole bus what Tara had in her backpack.  I think that was the one and only time she ever swore at me.

Another time I was sitting with my forehead on the bus window looking out, and maybe it was raining, and the Bette Midler song "From a Distance" happened to be playing on the radio.  I was absent-mindedly but seriously and pensively singing it quietly out the window.  Beth and Tara thought that was hilarious and made everybody on the bus silently come and look and I never noticed them because I was so into the singing.  I'm not sure I ever recovered from that one and I still sort of recoil in horror thinking about singing "God is Watching Us" repeatedly, over and over a thousand times out the band bus window.

Years later I found out that Beth's saxophone mouthpiece was broken and the entire year we were busing back and forth to band practice she was just pretending to play.

One day we got a special treat and went to Dairy Queen.  We pulled the bus right up next to a couple of guys in a sweet red convertible.  Beth slid the big yellow school bus window down, looked at the two guys, and shouted a line I still use to this day when-I-pull-up-next-to-anybody-in-a-car-cooler-than-mine,

Posted by A Lady Reveals Nothing at 8:29 AM

Menstrual products were HILARIOUS in high school. One time my friend Tonya was walking down one of the loooooooong hallways and I spotted something on her book. I squinted and finally saw that it was a pad stuck to her notebook because her locker was such a mess that pads were floating freely. I started laughing hysterically when she was about 50 yards away from me and by the time she reached me I practically needed to go to the hospital and I couldn't even catch enough breath to tell her THERE WAS A PAD STUCK TO HER BOOK! When she finally deciphered my grunts and points and saw the pad she was mortified which just made me laugh harder. Pads are funny.

So are tampons! My middle school days involved red markers and tampons and random planting of "soiled" ones in inappropriate places (like dangling from my backpack zipper, or under the water fountain). HA!