Sunday Favorites: The Only Time I Get Asked Out...


New to A Lady Reveals Nothing? You've missed SO MUCH. Not to worry. Every Sunday, I dig through the archives to repost an old favorite. Mostly because I'm too lazy to come up with new content every single day. Enjoy! This story originally appeared on August 30, 2010:

I went to a party in Southern Minnesota many many many many years ago. I was having a very nice time, thank you very much and so when the evening wound down I took on my usual role. You know, "crazy-girl-must-have-the-floor-talks-too-much-has-to-get-everybody's-attention".

Suddenly, in a comedic fit of awesome amazingness, one of my stories lent itself well to the following:

...which is where I stood up, grabbed my ankles, and let out a HUGE fart. HUGE. Major. Very loud. Disgusting. I would normally explain that I don't normally do that, (promise), but you wouldn't believe me anyways. Of course I got the hysterical laughter I was looking for (think: that scene in Dumb and Dumber where Jim Carrey is dreaming about lighting the fart and everybody laughs and laughs). But that's not the point of the story.

The point of the story is that a couple nights later, some random dude that was there called my house and ASKED ME ON A DATE. Here's how it went down:

Dude: "so I was wondering if you wanted to go to a movie sometime."
Me: "OH. You mean like, on a date?"
Dude: "yah."
Me: "hahahahaHAAAHAAAAHA" (maniacal laughter)

And then, my memory is spotty, so I don't think I said this out loud to him, or maybe I did? But I was totally thinking, "why would you want to go on a date with a girl who farts in public?" And "why is it I only get asked out in situations like that?" 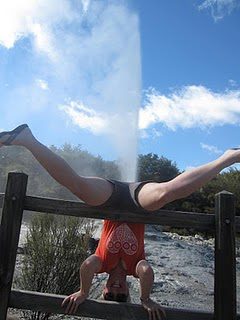 Note to Kady: quit questioning why someone would ask you out. Or are you really questioning what is wrong with them? Either way give it a try next time. You can always dump him if he farts in public.

It's more like, "what's wrong with you?" Raise your standards!