Labels: Sunday Favorites
New to A Lady Reveals Nothing? You've missed SO MUCH. Not to worry. Every Sunday, I dig through the archives to repost an old favorite. Mostly because I'm too lazy to come up with new content every single day. Enjoy! This story originally appeared on April 17, 2011 when I was living in Brazil: 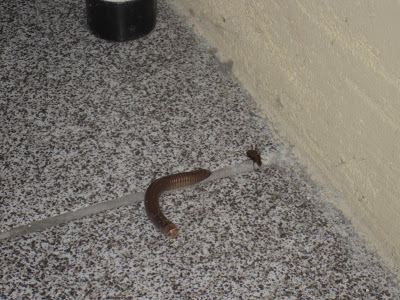 Unfortunately this baby cockroach and centipede made friends right under my kitchen table, and so I had to brutally murder one and set the other one free.  A terrible decision, 'which one lives and which one dies'...I didn't have time!  Did I make the right decision?  Was making my decision based on not wanting to feel the centipede squish in my hand the right basis?
This may haunt me until the day I die.

I may move to New York City and meet a handsome man and pretend it never happened, but he'll sense something is wrong...and finally, one alcohol-ridden night, I'll tell him.

Are you getting these Sophie's Choice references, or are they wasted on you, you idiot?  Maybe they're wasted on you because I don't remember much about that movie...just the moving to New York City and the pretending it never happened.  I really can't remember how she told him, and if there was alcohol involved.  Who's the idiot now?
Posted by A Lady Reveals Nothing at 11:07 PM