What About "Real" Dangers?

Labels: afraid, New Orleans
Some people like to visit cemeteries in New Orleans because of their incredible history and also the unique way bodies are entombed aboveground because of the floodplain. It was something that Summer and I "meant to do" while we lived there but we didn't for two reasons:
"Apparently" there are "people" who "watch" tourists going into the cemeteries and "follow" them in and "rob" them. We were skeptical about that but more than one person told us about this "danger" and others that usually turned out to be the warnings of crazy paranoid people.

Well, last weekend we rented a car so that we could show Laurissa a few of our favorite things outside the French Quarter and I thought it might be nice to find Uncle Lionel's burial place. I found on the Google that he was laid to rest at Mount Olivet, which is not too far from City Park, where we were already going. Summer reminded me about the "muggings" and I decided to be a grown up lady and call our Hotel's Concierge and ask if he would recommend tourists visiting a local cemetery.

Me: "Hi, we're guests of the hotel and we were wondering if you would recommend visiting a local cemetery. We had heard that it could be dangerous for tourists."

Concierge: "No! You don't want to go there. It's getting dark."

Me: (yikes...could the people be right?...but it's only 5pm...) "Well, we'd like to pay our respects to Uncle Lionel who was laid to rest at Mount Olivet and were wondering if that would be safe."

Concierge: "Well that's a great idea but it's getting dark. You don't want to go to a cemetery after dark."

Me: "We would be going right now. In the daylight. Would we be safe?"

Concierge: "No. You don't want to go to no cemetery!  That's Creepy."

Me: (ohhhhhhhhhhhhhhh...he's talking about ghosts...) "What about real dangers? Are we going to get mugged?"

Concierge: "No. Why would you get mugged?"

So we drove over to Mount Olivet. It was closed. FYI, when I Googled information regarding his whereabouts, I learned an interesting piece of weird information. They stood Uncle Lionel up at his wake. No joke. 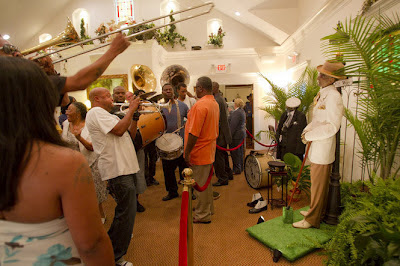 Posted by A Lady Reveals Nothing at 8:23 AM

I imagine one of those giant Barbie doll stands for dead people. Or did they just wait for the rigor mortice to really get going??

What a way to go.

I was always hoping you would get to see him again. I think he had a crush on you when you there before. Didn't he put his hand on your arse? Auntie Cheryl