A little journal-y entry, if you'll forgive me (I just want to catch everybody up, and come on I haven't typed a real long-y in forever):

Summer and I arrived in India on November 30th, to a little town called Coachin, or Kochi. We met up with our Minneapolis friend Kasey (who is currently living in Calcutta) for a few days and then got on a bus headed for a "hill station" called Ooty. The bus took way longer than we thought, and we ended up spending the night in an awful city called Coimbatore. We finally made it to Ooty after a bad bus breakdown and stayed there for a few days. Then we took another bus to Bangalore, where we stayed with friends for a few days and got on yet another bus bound for Hampi, where we stayed for two nights. Now we are in Goa, after yet yet yet another bus ride.

The point is after two weeks of 12-hour bus rides connecting us to two-night stays in different cities, I was definitely ready to stay.put. And, lets be honest. I've been moving just about every three days for THREE MONTHS. Anyway, we planned to stay in Goa for seven days (a dang luxury!), but when we went to buy a bus ticket out of here I threw a semi-tantrum and begged Summer for more time.

The beach town we are staying at in Goa is called Palolem. We have been here for ten days. Yes. TEN DAYS. Doing nothing but nothing.

Here is the list of the Nothing that I accomplished here: 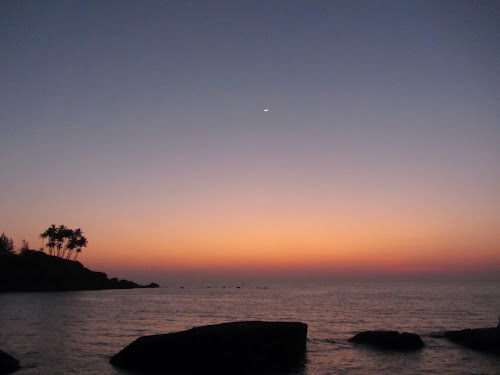 After this ten days of real-live R-and-R, I might, just might be ready to go back to the "real India". After another overnight bus Sunday at 5:30pm, we will spend just one day in Mumbai (hopefully going to the mall and watching a movie) and then take an overnight bus trying to get as close as possible to Jaisalmer in the state of Rajastan (aka Men-will-grope-your-boobs-astan), where we will go on a camel-trek and spend the night in the desert! After that, it's days on a train to Agra and the Taj Mahal, and an overnight bus to Veransi and then: another dang overnight bus to the border of Nepal and then walk across the border and then hire a jeep and then take another bus to Kathmandu until Summer leaves January 15th and then: anywhere I want in the whole world for two weeks (as long as its cheap cheap cheap -Tokyo is winning for flight prices) and then: home to see my lung-less, uter-less, cancer-less Mom and kiss her and hug her and tell her I love her a thousand times even though she already knows it because I typed it here.


*FYI: the nine-night hotel stay plus two loads of laundry cost me $61.

We did a google-search for American girls sleeping on a bus and this image came up. Feel bad we can't attribute it.

So I happened to take Hindi class last quarter and the most important word I learned I think you will find useful: "paad" is how you say fart. You are welcome.