Labels: Sunday Favorites
New to A Lady Reveals Nothing? You've missed SO MUCH. Not to worry. Every Sunday, I dig through the archives to repost an old favorite. Mostly because I'm too lazy to come up with new content every single day. Enjoy! This story originally appeared on October 30, 2008:

I don't know how it happened but I made it into First Class again all the way home. Maybe it was because I totally flirted with the guy at the desk at the airport in Cape Town and he green lighted me in First Class all the way home, even from New York to Minneapolis! He said, do you know your priority? (Which I think means, what is the seniority of the person who you're flying under) and I actually winked at him and said "TOP priority." It was so worth it. And I met a nice old lady whose luggage was completely filled with only yarn, and then I accidentally walked in on an even older lady in the bathroom because she was too old to lock the door. I felt so bad because I said, "OH I'M SO SORRY WOW THAT WAS REALLY RUDE WOOPS I MEAN GOSH I'M SORRY I DIDN'T WANT TO..." and then I saw that it was a really old lady and then I felt so super bad becuase she reached out to shut the door but she was much much too old to get up so fast and I stood there watching all of this and then I went to another stall.

I killed some time at the airport and got 20 BUCKS BACK at the VAT counter! But the 20 bucks was in rand and so I had to spend the money at the airport kind of like vintage Wheel of Fortune. YOU WIN! But you win the fun of buying crappy stuff for your house! How about a porcelain dog statue? YAY! But I bought a monkey for Murphy that was really really cute and it made me happy. 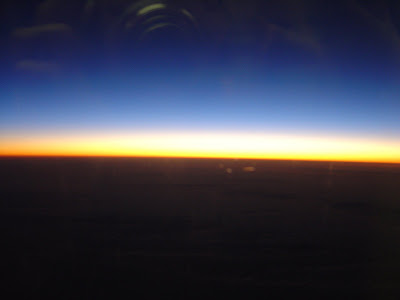 And then I took this photo because first class is SO awesome!: 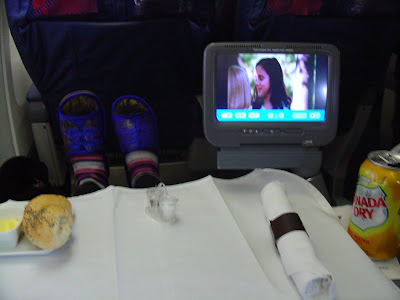 Can you see all the space at the end of my feet? Can you see how wide the chair is? Can you see my special down-like blanket? Can you see I remembered to bring my slippers with me on my trip? Can you see my tonic water, my individual salt and pepper shakers, my bun with butter? And that was before dinner people! Can you see Kitt's neighbor, so happy before her home was taken away by the evil, evil bank?

I didn't bother getting out of the airplane in Senegal on the way home. I already been there. But man do they wake you up. DING DING DING DING. Attention everyone. Ten dudes from Senegal will now get on the plane and remove the cushions from your seat and run their hands inside the compartments of your suitcase and say "ma'am is this your bag?" and then spray some sort of deodorizer up and down the aisles of the plane and then you might get a chance to sleep after that but probably not.

Wow amber lead tobacco, what a nice compliment! Also how did you get past my spam filter?