Tourists in Our Own City

Labels: Auntie Kady, band, Hanna, Minneapolis
I just did something I have been wanting to do for a long time. And really, how can you go on a tour of the world if you haven't even seen the sights in your own city? So I decided that before I leave my beloved Minneapolis, I owed it to myself to pay tribute, however small. Of course the day couldn't be any crappier, slipperyer, or colder. But anyway. We started out with a visit to the Mill City Museum, "the most explosive museum in the world". In the 1800s this place blew up because they had no means of collecting the flour dust and they were ignorant of how explosive it was. Somebody lit a match or something and pretty soon there were chunks of this building landing all over the city. The shock was felt as far away as Wisconsin, where people mistook the shaking for an earthquake. My sister Kasey and my nieces Miyo and Hanna joined my friend Laurissa and me for the tour. It's $10 per adult, $5 per teenager, and free for kids. I highly recommend it, in part because of a video called "Minneapolis in 19 Minutes Flat" which left me in tears. This is a pretty cool town, folks. 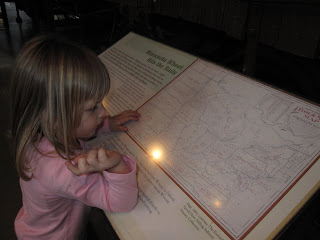 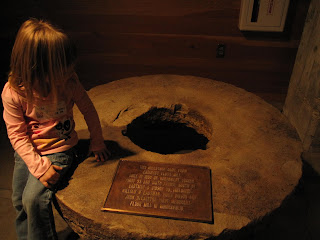 Miyo "reading" about wheat, and enjoying the mill stone brought into the museum. 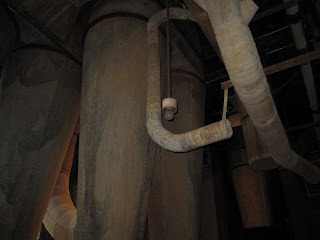 Vacuum dust collectors, brought in to prevent another explosion. They work by basically vacuuming the dust out of the air. 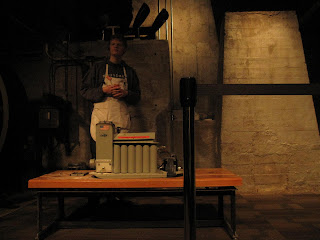 A demonstration of how the place blew up. This guy added a teaspoon of flour a little air and then caused a spark and it BLEW UP! He said there were a million pounds of flour produced every day. Imagine the explosion if a teaspoon of flour was enough to SHOCK! you.

From there, Kasey had to get going to pick up her other kids off the bus, and so Laurissa and Hanna and I continued our tour of the city and visited Minnehaha Falls, frozen and mysteriously blue in color. There was a man behind the falls in hiking gear and we all decided that would be fun, but our shoes probably wouldn't allow the climb down the restricted stairway. 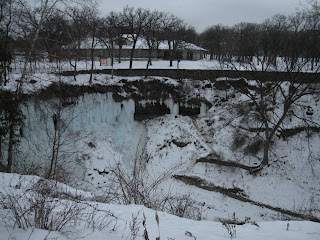 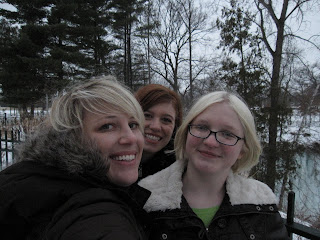 And then it was on to my favorite bakery, "A Baker's Wife", where they serve the most fantastic tea cakes you've ever had. Please go there immediately and buy one. To DIE FOR. 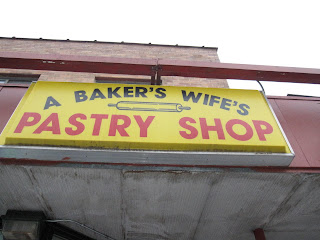 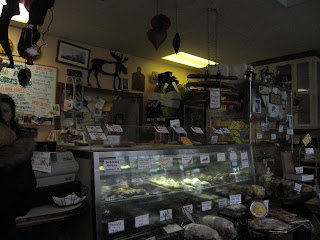 Then, Laurissa had to go to work and so Hanna and I went to a movie at the Riverview. They are a $3 theater in South Minneapolis, but only charge $2 for a matinee. We saw The Fantastic Mr. Fox at 5pm for $4 and loved it. Technically it was $8 because we forgot they only take cash and I only had $2 on me, so I had to take cash out of the ATM which probably has a $2 fee, and then my bank will probably charge me another $2. Then, after we left the theater, Hanna found a bunch of cash in her pocket. Dang!
These reels were in the hallway outside the theater. They all said New Moon on them. I'm really not sure, but could it take this many canisters to house one movie? Cool. 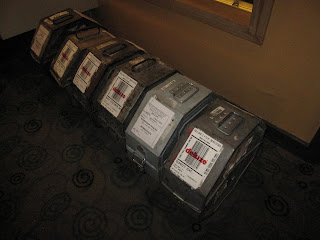 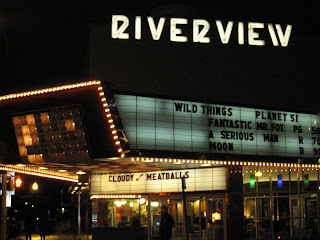 The movie let out at 6:30. We found out that the MIA (Minneapolis Institute of Arts) is open until 9pm on Thursday nights and is always free. So we went and I was really impressed with the selection of art and sculpture collected from the world over. India, China, Japan, the South Pacific, the Americas, Africa...great collection. Hanna was most enamoured with the India rooms, where there were incredibly intricate carvings of Hindu figures, surrounded by tiny little people carved in the stones. Daughters of the Sun played a free concert, and so we perused art to a nice soundtrack. I admit it was very loud in the museum, and a little echo-y, so I employed my earplugs. I always carry them in my purse, because, well...I'm in a band. *cough* And I made sure to tell the lady that asked me where I got my earplugs the same thing. *cough* 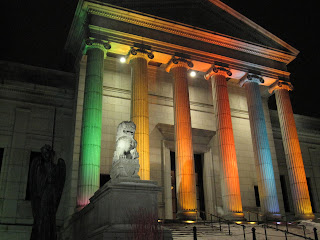 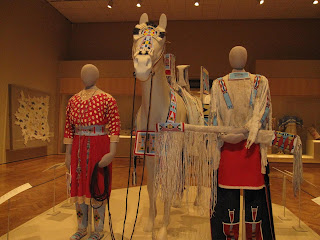 Minneapolis, Kady style. And, my photos are all pretty dark, because I had forgotten that I changed my F Stop to -2 in Mexico because it was way too bright. Sorry about that, folks.
Posted by A Lady Reveals Nothing at 5:47 PM