Labels: book review, Central America, deep thoughts, irritated, Kady Stupid
Today was a nice lazy day.  I woke up just in time for the free breakfast at my hostel (rated very highly online and in the guidebooks...place is called El Hostal for those that are interested), which by the way, ends at a very healthy 10:30am.  So I was able to sleep in and still enjoy the yummy food.  And, it wasn't just a roll and some jam.  It was an eight-option full brekky to include coffee.  I ordered the huevos rancheros and it was muy yummy.  After that I read my book for a while and consulted a guidebook from the community bookshelf and set out on a walk that would take me 10 blocks out of my way, in search of the central park.

Ah, the Parque Central, or the Town Square.  Something that every foreign town seems to have and that most American cities lack.  It's my favorite thing to do, when traveling.  Hang out in the park.  With coffee, of course.  It's pretty simple, but very serene, and great for people watching.  Today I saw lots of indiginously dressed little girls who should be in school selling wares for what appeared to be a bossman.  Though I wasn't sure if it was just an unfortunate dude who expressed an interest and then got mobbed? 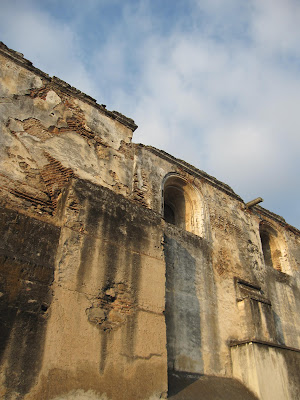 Today I spoke with a little girl who was trying to sell me her wares...I engaged her in conversation, though expressing that I simply couldn't buy anything from her not only because I didn't have money but more importantly, didn't have the space in my backpack.  She didn't leave my side for a very long time.  "Do you have a quetzal for me?"  I told her no, sorry I didn't.  And I really didn't, my smallest bill being a 20.  She told me we could walk to the Chicken place, Guatemala's KFC and that she hadn't had anything to eat all day.  I said, "I don't believe that, it's not true."  Can you believe what a hag I can be sometimes?  And even bilingually?  I just hate the lying.

As if to illustrate my point, later on a man came and sat next to me on the bench where I was reading.  He interrupted me to ask what time it was.  I told him and then we started a conversation about very basic and benign topics and I kept waiting for him to drop the shoe.  And, sure enough, pretty soon I got the 411 on how he had to walk two hours just to get to Antigua, and back home due to some disaster he and his wife and four kids (whom he went so far as to name...classic LIAR) hadn't eaten in three days.  I asked him why didn't he take the bus?  He said, it's 15 Quetzales.  B.S. the bus is way cheaper.  Then I told him that I was so sorry for his problems, but had no money for him.  Then I said the best advice I could offer him is to rely fully on his faith in God and that is really our only hope, no matter what our problems are, thereby trying to engage his "Catholic guilt" and make him feel BAD FOR LYING.  Next, he apologized to me.  Go figure.

I am learning a lot about tactics used to extort money.  Because, kind reader, before you judge me too harshly, this is not the first time I have heard this EXACT STORY.  I have fallen for this approach many many many times.  And have parted with a lot of money, figuring, if this person is lying, then it's on him.  I can't be held responsible, and the way I felt personally -- I would prefer to help just IN CASE they are telling the truth.  I'm changing my opinion on this.  Maybe it's because of the white guy in Cambodia who told Summer and I the sad sad story of how his backpack was stolen, and I was very skeptical and so was Summer, but we both silently decided well IF it's true, jeez we feel for the guy.  We both gave him some money.  Neither of us gave much of course...(and realized later as we discussed it) that there was no WAY that guy had his backpack stolen.  He did look like a backpacker from the waist up, but was filthy dirty disgusting from the waist down especially the bad shoes, telling us about his valuable camera that he loved so much and his wallet and passport.  Our skepticism was confirmed when a couple dudes later told us that guy lived around there, and used the same story ALL THE TIME.

I feel judged right now, even though I haven't even published yet.  Probably because the last few paragraphs sound like they were written by a huge HAG.  I feel the need to defend myself by sharing that I am not opposed to charitable giving, and I do it, but I ain't gonna talk about it here.

Which leads me to a new half-book-review, more to follow.  I'm reading a book recommended to me by Bridget called "blink".  It's about first impression, or intuitions.  That gut instinct is usually right.  The more information you have, the more muddled your decision will be.  Go with your gut.  It's so good I can't put it down.  Not finished yet, but will review for my cousin Jacqui because she loves my book review so much.

AFTER my reading in the park, I started to walk back, shopped a little without buying anything, and stopped into a barber shop.  I chatted with the barber about my fear of going into a salon at this stage of my growing-out my hair (because I don't want any hairs cut on top, JUST the back), and he understood me perfectly.  He cut only the tiny section of hairs I asked him to cut, and for only $6 US.  NICE.  Then I thought I got lost trying to get home, but turns out I was heading the right direction the whole time, and that's when I realized I live only three blocks from the central park in the first place.  I walked 10 blocks out of my way to get there in a big huge circle.  My mistake was taking a right out of the hostel instead of a left.  Oh well.  I need the exercise, and Antigua sure is a beautiful city in which to go walking aimlessly.

POSTLUDE:  a note on Hostel dorm room etiquette:  Don't steal other people's beds, you stupid jerk.  If my stuff is on a bed, you are not allowed to move it to another bed and then TAKE A GROSS NAP on my bed and claim it for yourself.  I'm still trying to decide if I will confront?  Nobody does this, people.  Nobody.  It's part of the code.  The hostel dorm room code.

POST to the POSTLUDE:  If you're following my map at the bottom of the page, you may notice that I have added three more countries, upping the grand total to 42!  I get a kick out of that.  Hope you do too.

AND: FINALLY: POST POST POSTLUDE:  the dude didn't move my stuff, the maid did.  I decided not to confront because I thought in the end maybe it was the maid who moved my stuff.  She was totally here when I left, and I used both beds to get ready, since she was changing out sheets...well, anyways.  When he got back from out, he asked, "did this happen to be your bed?" and I said, "did the pile of clothes tip you off?"  He said there was no pile of clothes, we laughed and I explained how glad I was he clarified, since I couldn't believe somebody would be that much of a d-bag.  Then we talked into the wee hours about Latin American History, since he is a graduate student and that is his major.  Interesting stuff, and I had something to contribute, with my vast knowledge of Sandinista history in Nicaragua after I read that one memoir.  ha.  But I learned a lot.  Por ejemplo...his military unit ran sensors over a random ravine on the US/Mexico border and as a result apprehended just the drug runners, not migrants.  How many did they catch?  700 in three weeks.
Posted by A Lady Reveals Nothing at 9:51 PM

Don't feel guilty for not giving kids moneys. I refused to give money to some kids in Grenada. I got some grief for it...ask Bridget.

Nice move with the catholic guilt! You are a pro.