Labels: Central America, Fun With Language, pee
Actually, quite pleasant, if you can believe that.  Though, we got off to a rocky start.  Bridget drove me to the pick up point (Texaco in Esteli, 4:30 bus leaves), we left the house around 4:20 and as we took a left onto the Pan-American Highway, a bus drove right by.  I laughed, imagining it was my bus.  And it ended up being my bus.  So I kind of almost missed it but not really because it sat at Texaco for quite a while before leaving.  So I got on the bus after paying an additional $6 US for "la fronterra", a word I recognized to mean "the border", so I was like irritated thinking I had to pay the bus $6 and then thinking I would have to pay personally like, $25 to enter Honduras and another $25 to enter El Salvador and probably money to leave as well, as is typical.  In the end, it really was only $6 to leave three countries and enter three countries.  Gotta love Central America.  That said, we didn't ever stop for food or toilets, so in the end I went 14 hours with no eats or pee.  Good thing Bridget mentioned that I should bring some snacks!
Yah, so bus ride was comfy, I got two seats to myself, fully reclining...foot rest.  It was great, except the SNORING BUTT CRACK MAN.  But, there always has to be one, right?  In every hostel room, on every bus, every airplane?  The snorer?  The guy who makes you think murderous thoughts?  The guy who, keeps you awake for hours, but then you find yourself thanking him when he rolls over or wakes up momentarily, as you think, "here's my chance, my quick ten second window to fall asleep"?
Here are some views from the trip.  Sadly, my photos of Honduras and El Salvador were from moving bus window, but man, what a gorgeous ride.

We actually watched 6 movies on the ride, 5 of which I had not seen.  Normally I would consider that a HUGE goldmine, but unfortunately they all played in barely audible Spanish.  So I was sort of able to make them out.  Kind of.  But not really.  Like I'm pretty sure I got the plot of "Old Dogs", "Rebound", "Grown Ups" and "Night at the Museum 2", but I kind of want to re-watch that movie with Sandra Bullock where her husband dies but you're not sure if he's dead because she seems to be dreaming?  And I had already seen "Maid in Manhattan" so I slept through that one.  I had to put in my iTouch earphones to drown out the snoring, and thanks to Ray Lamontagne I did fall asleep...

I crossed three borders today.  At one, the passports were checked as a group and nobody talked to me, another they checked my passport three times, including having armed personnel come onto the bus and search my bag, and the third I physically had to go into the office, get stamped and then walk across the border. 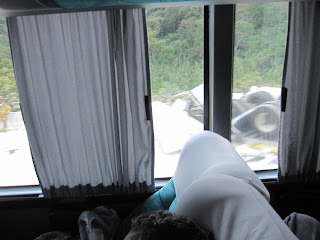 Here's a photo of the entry to Guatemala, which I had to walk across.  So far, I have walked from Thailand to Malaysia, Vietnam to Laos, and now El Salvador to Guatemala.  That's kind of neato, right?


I did eat a Snickers bar, a small bag of Doritos-like chips, and a mini-four-pack of vanilla cookies.  But when we finally got to Guatemala City I was ready to die of starvation. After peeing the orangest pee in the world, I walked outside into the dark of a very dangerous city to try and get a cab, either to a Hostel in GC, or to Antigua, about an hour away.  A man asked if I needed a taxi.  I asked, "do you want to go to Antigua?"  "Sure!" he said, and I was surprised.  Also, I was prepared to talk him down to $40 from $50.  He said it would be $35, and I accepted, too quickly, wondering if I could have gotten it cheaper.  A bus is only $11, but there is a risk of hi-jacking and I didn't want to deal with that, after a 14 hour bus ride no less.
He brought me to his unmarked "taxi" and I stopped.  "No esta taxi?"  and he said, no it's a typical car but that's because he works for the bus company blah blah blah.  I looked at the other taxi drivers, and asked if he was legit and of course they said yes.  I regret not making him go back with me (and me pulling him by the ear) inside the building and verify his identity but in the end he was for reals.  He showed me some I.D. inside the car.  And for 2 hours we Chatty-McChattersoned in SPANISH and I felt so excited about that.  We talked about all kinds of smart people stuff above and beyond the basic crap about where are you from and stuff.  That was amazing for me.  Sadly, he had two brothers die in the war in El Salvador, one was 17 and the other was 20.  I commented how I find it very sad that all wars seem to be fought by a bunch of little boys on either side, none really wanting to be there, all having at least that in common with the "enemy".  He continued that even today, 10-12 year-olds are fighting for Guatemala.  Blurg.  I knew about child soldiers in Africa, but wasn't aware of it here.  So sad.

He brought me right to the front door of my Hostel, and I checked in, met a girl from Korea who joined me for dinner directly across the street, where we had Argentinian food and live music and it was kind of a wonderful night in a country I'm a little scared of.  Take that, fear!

Signed, snug as a bug in my safe hostel bed, next to a girl from Korea and two dudes from Denmark,
Kady
Posted by A Lady Reveals Nothing at 12:27 AM

That all sounds fascinating, and terrifying and I'm glad I can read about it instead of doing it. Butt-crack man is wearing a belt??? Why? It needs to be tightened. How can anyone sleep for 14 hours? Oh, never mind. I can.

Good for you KD! Part of my traveling is to conquer fears as well. And you're out doing it on your own. Love it! I won't go on about my minuscule 7 hour ride through Thailand and the 7 mind numbing hours of 140 decibel Thai Karaoke that went along with it.

So are you saying the bus ride was actually $120? Anyway, best to you and I know you'll be fine. That's always what I tell myself.

Yes, unfortunately I did pay $120US (round trip). I made that decision for safety, because I'm traveling alone and didn't know what to expect. You can easily take the same trip for something like $40US, but legend has it those buses don't pay off the bandits and frequently get jumped and robbed. Also you have to stay overnight both ways in El Salvador, so it costs more like $80US, takes longer, and may include chickens in your lap. Not to say I'm against it because I will be taking the Chicken bus from Managua to Costa Rica, because it's a much safer route.

p.s. SE Asian buses are CRAZY with the karaoke, eh? I really didn't ever quite get that, but found it wildly hilarious.

Well spent money I think. No need to see what all the crime is about. Keep up the good stories! Keep using your gut instinct when you can...