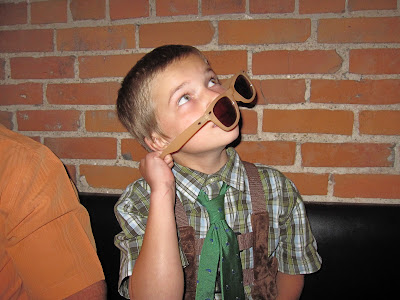 Do you remember this little ditty of a story?:

Click here to read a hilarious story about how I thought there was a burglar who poops in the toilet before murdering his victims.

It turns out Murphy was on the potty tonight, giggling and saying "Just try, OK?" over and over again.  Murphy likes to torture us by repeating our commands back at us, while disobeying them.  This is similar to how he runs around at the pool while screaming, "No running!"  Anyways, then Ben said "If you poop in the toilet, you can have some ice cream."  Apparently his little face immediately went serious and then he pushed that huge thing out.  That footlong-sub-sandwiched-sized-thing.  Yay Murphy!

If only I had known this little bribery trick all summer while Murphy and I spent precious HOURS in the bathroom.  I actually put him on the toilet every hour on the hour and made him sit there for five and sometimes up to fifteen minutes.  You can imagine the frustration.  Me, sick of changing his diapers, and him, probably sick of me encouraging him with phrases such as, "PUSH! PUSH!" and "Just try, OK?"

The "Push, Push" thing is so funny. I feel like I am coaching him to give birth to a turd. "Alright, you're almost there. Just a couple more pushes and you'll be done. Good job! You can do it! Just like that. I'm so proud of you, Murphy! Now shake your butt so it falls."

ha! I'm embarrassed but one time I grabbed his knees and pushed them up to his chest like the nurses made us do with Kasey's legs when she was giving birth. I thought maybe gravity might take hold.

p.s. do people shake their butt so babies fall out?

Yes, yes they do.

"Those are my sunglasses"

Did I just "quote" myself? What is up with the quotation marks on my previous comment?

Yes you did "quote" yourself. Twice. They are nice "sunglasses" though.

I love when I give Murphy a choice, like "You want a cheesburger or chicken?" and he repeats "cheeseburger or chicken". But then he realizes that I might actually get him a cheeseburger, so he makes eye contact with me and says "chicken?".

I may never be able to eat ice cream again without thinking about Murphy pooping.

I remember those days, sometimes a challenge, but always fun!! By the by in your blog column Poop is under recipe and so when I come to the Poop Recipe, I naturally, like YOU stop and stare... Then laugh.