Labels: Arizona, misunderstandings, Serco
One great way to save money on a road trip is to just sleep in your car.  Especially if you somehow luck out and your company lets you drive around in an SUV and you can fold the seats down and make the hugest. best. cushion. bed. ever.


Which is exactly what Summer and I did when we road-tripped it up to Sedona and the Grand Canyon.

Of course you can pretty much pull over anywhere you want to and sleep, but there are places that make more sense, like State Parks and Wal-mart parking lots.  I mention Wal-Mart parking lots for a couple of reasons:

There is a downside of course, and that's bright lights and loud noises.  Nothing a little sleeping mask and earplugs can't take care of if you prepare yourself!

We spent our first night in Sedona and slept soundly under the stars in a State Park lot, where we paid $5 for a 24-hour pass.  No bright lights, no noise.  Gas station with Redbox and a nice bathroom right up the street.  Perfect. And this was our view when we woke up: 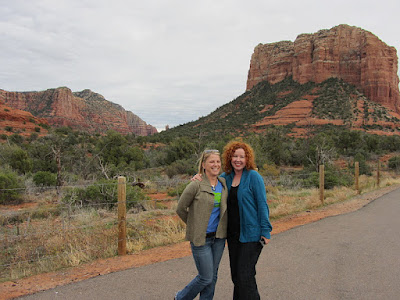 The second night was spent at a Flagstaff Wal-Mart.  Everything went off without a hitch, (after Summer shooed the drunk old man away).  We parked right next to a family sleeping in their camper and slept soundly until morning, when we freshened up in the nice clean bathrooms.

The third night was a little less perfect.  We drove to Phoenix, punched a Wal-Mart into the GPS and arrived at one whose late-night clientele left us feeling a little less than cozy.  Also the bathrooms were gross.  We decided to pull to the very edge of the parking lot next to where they sell the Christmas trees behind the chain link fence.  That ended up being a tactical error because at 7am, when the Christmas tree shop opened up, we were parked right in front of the doors, and I was awakened by the sound of a gruff salesman asking a customer, "What? Did they move in?"  And then Summer and I stared at each other, mortified, trying to look invisible until they walked away and then Summer jumped into the driver's seat and drove us around the corner to Target. 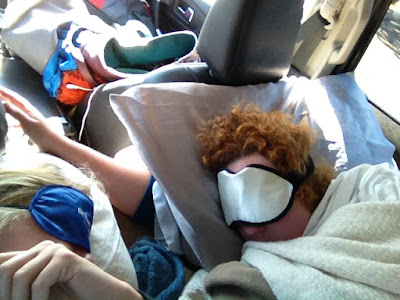 We got ready there instead.  After Summer left the Target bathroom, I realized I wasn't going to be able to make it one more day without washing my hair, and it was so early in the morning and nobody was in there, and I brought shampoo and conditioner and they had an air dryer for your hands...  I decided to wash my hair in the tiny, tiny sink. 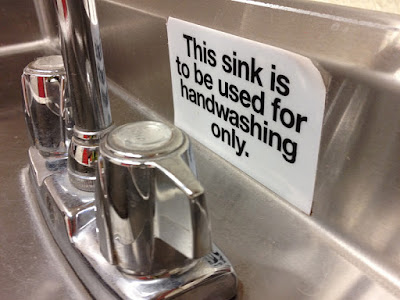 I couldn't help but feel like I was doing something really, really wrong.  Like I was going to be busted and kicked out of Target at any moment.  I was almost done when a little old lady came into the bathroom with a walker.  I said to her, "just pretend this isn't happening," as I wrapped my sopping wet hair up and grabbed all my stuff out of the handicapped stall so she could use it.  At first she seemed irritated...but kept talking to me as she used the restroom and I finished up with my conditioner and drying with the air hand dryer.   I nervously explained that we were on a road trip and didn't have bathroom facilities.  She said, "well this is the cleanest bathroom in town, I don't blame you for coming here.  You know, I like to come here to the Target bathroom and then go do my shopping at Wal-Mart."

I began to suspect that she thought I was homeless because she asked me several times, "Do you need help?  Is there anything I can help you with?"  And as she left the bathroom she cautiously and hesitantly said, "have a safe and happy life."
Posted by A Lady Reveals Nothing at 7:00 AM

hahahaaa. i love car camping!
especially in state parks.
you two have some balls to sleep soundly in wal-mart.

They denied the request in Chanhassen, MN to put in a Walmart because it would take away profits from other stores and it would lure in RV nightly campers. (Riff-raff) Auntie Cheryl

I know right? Fundamentally I hate that place. They did come through for me on the Dry Shampoo front though.

I get it...you were totally hand-washing your hair. You sound like up-scale riff-raff.

Car camping looks like fun! You will be able to camp out without the difficulty of setting up a tent. Your dog seemed to have enjoyed it too.