As Hilarious as Prostate Cancer Can Be...

Labels: cancer, family, gross, Hal, life up North, pee
Maybe some people are wondering what the heck is going on around here.  So I'll get serious for one blog post (forgive me) and tell you what I know about my dad's surgery.

My dad has been having pee problems for about ten years but didn't really think anything of it.  He would have to go all the time, is all.  Plus when he went to the bathroom the pain went away.  It turns out that his prostate was enlarged and just like on those "going problems?" commercials, it was putting pressure on his bladder.  When he would go to the bathroom the pain would go away.  Obviously.  So anyways, my mom works at United Health Care in International Falls, and they were offering free health screenings and somehow she convinced my dad to go.  They gave him a PSA test, which is a routine prostate cancer screening test.  Well his levels were high enough to cause concern and after having a real doctor's visit he found out that he in fact did have prostate cancer.  And now here we are.

His doctor anticipated the prostate itself was about the size of a golf ball.  Not until they were mid-surgery did they realize it was actually the size of a tennis ball and had fuzed itself to dad's insides.  Like his bladder and Uranus.  How the heck wouldn't they know?  You ask.  Well.  My dad is a tiny man.  With a tiny pelvis.  If you look at him from the back.  But, he has kind of a big belly.  My mom always said that he has always worn the same jeans size since she met him, he just sort of wears them under the belly now.  So they just didn't see the correct size of his prostate, and then when they got way down in there in his tiny pelvis with their instruments to remove it, there wasn't a ton of room to move around.

Here's the really cool part.  The surgery was performed by a robotic machine.  Seriously.  Called the Da Vinci.  The doctor does all his stuff from a remote control, and the machine sticks five needles into the patient's torso, in a half-moon frowny face shape.  Then somehow miraculously the prostate comes out in a zillion pieces.  They don't normally do it laproscopically when it's so big because it takes too long and because they dont want to cut it up and release cancer into the body.  But of course they didn't know it was so big and they were already in there so they just went for it.  So the normally 3 hour procedure took 9 and a half hours.

Would anybody like to see the handsome and brilliant SUPERman who played a Prostate-removing video game for 9 1/2 hours and rendered my dad pretty much cancer free?

So now my dad is in the hospital for a few extra days, his recovery is expected to last 3 months now instead of 3 weeks, and today I accidentally saw his butt. 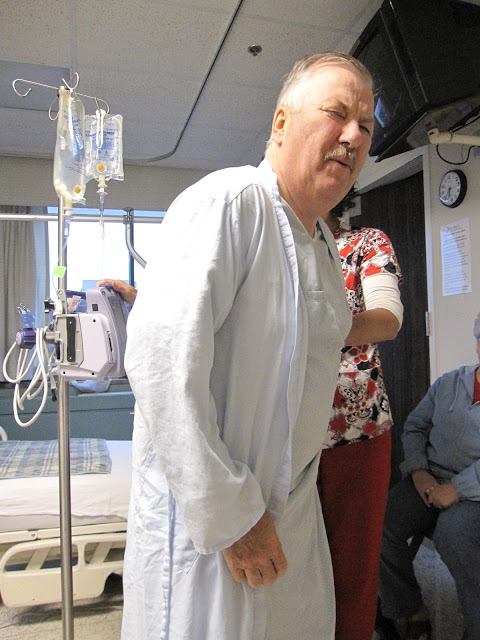 Posted by A Lady Reveals Nothing at 8:34 PM

I think its totally awesome that he's on his feet already. My dad has had this for 17 years and still going strong. GO HAL!!