Just one of my Obsessive Compulsions 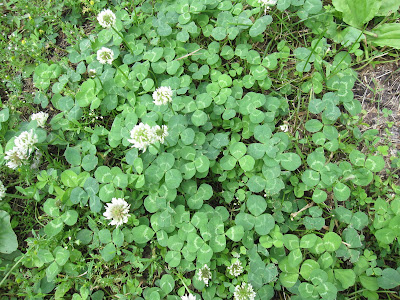 I can't pass a clover patch without zombie-zoning out of whatever conversation I happen to be in, veering off the walking path, and staring at it until I find a four-leaf clover.  Ever since I was growing up at South Falls Apartments, or the 'ghetto', I have been obsessed.  When I was little I used to find five-, six- and seven-leafed clovers quite frequently.  I haven't seen one of those for a long time.  But I find four-leafed clovers pretty much every time I look.  Which is part of the compulsion.  I HAVE to find one.  And if I don't, I keep looking until I do.  It's fun!  Join in.  There is one in the above photo.  Can you find it?  Click on the photo to enlarge it if you need to.

So on Sunday I took a few inadvertent walks around Minneapolis (my car is at my mom and dad's place up north) and I marveled at just how many clover patches there are here in Minnesota.  They were nearly impossible to find in SE Asia, but trust, I did find them.  But here they are EVERYWHERE.  Anyways, BAM!  I found TWO right away.  Bam Bam!  Then at the third patch I had to search a while.  Right alongside Busy Lyndale Avenue.  When I finally found one, I held it up in triumph to the man walking by me on the sidewalk.  But he wouldn't look at me.  Then I held it up in triumph again to the couple that were parking their car.  But THEY wouldn't look at me.  And so I threw the thing to the ground, pretending I wasn't actually trying to get anyone's attention by waving a four-leaf clover and looking at them with huge eyes and wide smile and kept on-a-walking. 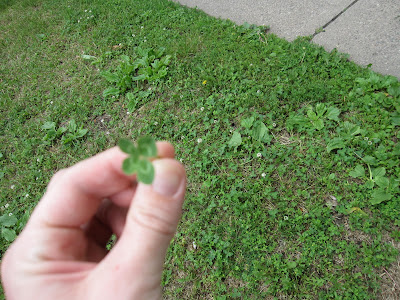 Which leads me to this confusing find: 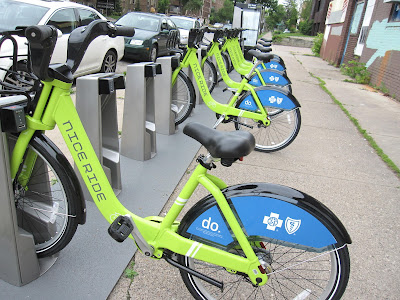 We have a pretty cool mayor in Minneapolis.  I don't know anything about his politics AT ALL, but he sure seems to be motivated to push public transportation and tries to keep Minneapolis a bike-friendly city.  (We were voted number 1 in the US!)  He even participated in a triathlon that I did a couple summers ago.  So this whole bike share program got me very excited, until I checked out how it actually works.

You have to swipe your card, which secures a $250 deposit.  Then you are straight up charged $5 for a 24 rental.  Which might be OK if you get to keep the bike for 24 hours and then return it.  No, you have to keep it at their docking stations.  They are located everywhere, but everytime you remove and return it, you have to pay EXTRA based on how long you had it out.  0-30 minutues is free.  31-90 minutes is $3 extra and so on.

So tell me, "Who is going to use this service?!"
Click here to read the article about the program.
People who already use public transportation.  They're trying to help folks who already take the bus.  ARGH.  In Denmark, you pop in a dollar coin, get the bike out, and when you return it, you get your dollar back.  Same as in Australia.  You just make the bike ugly enough that nobody would want to steal it.  At least that's what it looked like they were doing.  I'm disappointed in this program, because while it should encourage people to go from CARS to BIKES, it's not doing that at all.  And probaby the most expensive part of the program went to installing the HUGE money taking and card swiping machines that operate the elaborate bike stands.  Also, no bike lock is provided, so if somebody steals your rental, you're on the hook for $250.

WOW.  I can't believe I actually stated an actual opinion on my blog.  About something I hardly care that much about.  Must be back in America!  The point of the story is, I was going to have to pay $8 to borrow a bike to get me from my hair appointment back to where I was staying, and so I opted instead to ride the bus for $1.75.
Posted by A Lady Reveals Nothing at 5:47 PM

The four leaf clover is in the lower right corner. Am I right?

BUT...You found a second one I didn't see!! I'll send your prize in the mail.

i also saw the lower right first. did you see the one in the upper left?

Yes mine was the upper left. If I had a job, I would offer a cash prize if somebody finds a third!