Labels: family, Hal, life up North, overheard
After his prostate surgery, my dad and I were sitting in the kitchen, kind of talking to each other, but not really.  I overheard him thinking out loud.  He said to no one in particular:

"I should shoot a crow.  But what if I gut-shoot him and he has pain like I had? Go in peace brother, we've fought too long. Eat grasshoppers. Crap on my lawn. Wake me up early in the morning."

This man and crows have a stormy relationship let me tell you.  He once interrupted a story I was telling (while standing in the doorway after driving five hours to visit him) to grab a gun and shoot a crow out of the front door -- that sits in city limits.

One time he was visiting me in my high-rise downtown Minneapolis apartment the year we had a HUGE crow infestation (seriously, The Birds-esque).  He saw them off my balcony and went running down the hallway to 'go get his gun' and I had to explain that kind of thing was not acceptable illegal.  You can't just go shooting guns off balconies, even if the crows had it coming.

Come to think of it, when I was a kid, he always told me that I was "pooped by a crow, and hatched by the sun".  In other words, I think he may have killed my real parents. 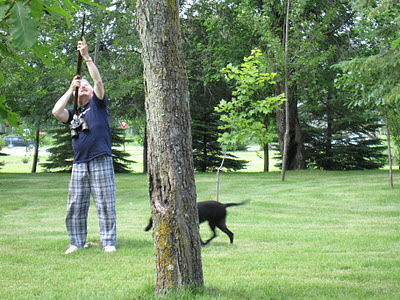 Posted by A Lady Reveals Nothing at 6:19 PM

Okay, first of all, when I saw the title of this post I thought it said, "Crowning" and I was afraid of what it might be about. Then I re read it and saw that it was about crows. I have a similar story to the one where you were talking to your dad and he grabbed a gun and ran. My dad does that too, but he got a squirrel. I was right in the middle of a story. Then he came back about 10 minutes later and said, "From tree to freezer in 5 minutes. Now what were you saying?"

LOL about how he killed your real parents! I'm still laughing about that one.

My dad's got a very complicated relationship with the crows. Hopefully post-surgery now his compassion for animals will grow and grow. He said he's not going to kick dogs anymore...

two corrections....I'm sure it was his 17 rifle, not a shotgun...and we do not live in the city limits. The city limits start at the bridge down the road.

Question: are you girls really going to leave me with this guy who is talking to himself outloud like that?