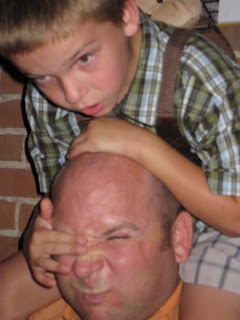 The one on the bottom is my brother Pete.  He's super tough.

For example, today, Pete was relaying the story of the doctors' explanation of the outcome of my dad's 9 1/2 HOUR PROSTATE REMOVAL SURGERY (which by the way took three times longer than most prostate removal surgeries...since my dad's prostate was the size of a TENNIS BALL and decided to fuze itself to the embarrassing innard part that rhymes with Uranus).  He said, "and you know, I got emotional, but I didn't cry, obviously.  Because I'm super tough."

And then the doctor said that Pete was next.  For prostate cancer. 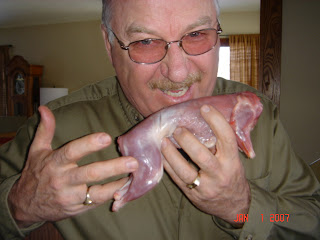 (Dead squirrel meat. Apparently not effective in the prevention of prostate cancer.)
Posted by A Lady Reveals Nothing at 10:46 PM

Oh my god. I am so sorry to hear about Hal's prostate. And I'm happy to hear your brother is tough. And I think that doctor doesn't have a very good bedside manner. And I can't believe you told the whole internet about your dad's Uranus!

Give Hal my best wishes!

I'm confused. I thought they just removed the tumor that had attached itself to his prostate and "rhymes with uranus". Did they actually remove his prostate? And was House his doctor, because that crack about Pete being next sounds like something he would say! Love, Jacqui

yah. They removed the whole prostate. Which had fused not only to the Uranus, but also there were fingers of it grabbing onto and digging into his bladder. So the surgery was a big deal. It was all done laproscopically too with a machine called Da Vinci. Five knitting needles operated by a robot. Quite fascinating.