Labels: afraid, Central America, facing fears, gross
Our last roommate's name was Scorpy.  He was super introverted, to the point of being creepy and only came around in the evening.  He used to sidle in with no warning, which unfortunately was his undoing, because, as we should have explained to him at application, we are girls, and scorpions FREAK us out.  In the end we ended up murdering him with the help of a male neighbor.  I believe they call that "accessory to the murder" on Law and Order, which I am watching in spades these days.  No bigs though because he was NOT pulling his weight. 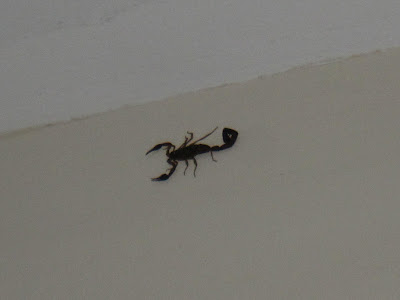 The murder weapon.  A mop handle. 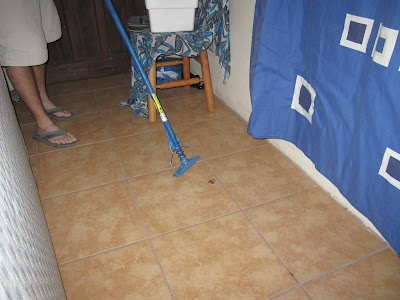 Meet the new rental applicant: "Hops".  He wants to move in so bad he hangs out near our front door, staring at the wall for hours. 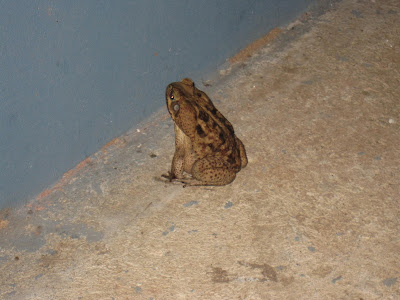 In my old life, it was 70 hour work-weeks and 45 minute commutes, sometimes in crazy deep snow and slippery ice that were the main causes of stress in my life.   This evening, I felt myself doing some deep stress relieving breathing.  What's causing the tension?  It's the creepy crawleys!  They're everywhere.  Snakes, toads, scorpions, spiders, geckos, lizards, tiny little beach crabs, oh, and howler monkeys right outside our window.  We have Langostas too, which are basically GIGANTIC grasshopers that CAN. FLY.  I don't have a photo of a Langosta, because when I see one, I get the heck out of there.  They're super spastic and don't have a real well thought-out flight plan so watch out!

Just a guy who likes a fair fight said...

I know guys are different, because we would have made a small ring or octagon and had said animals duel for the right to be let free. Like gdladiators or whatnot. What a waste of a good fight night! In this corner weighing in at 1.7 ounces. Scorpy the SCORPION!!!! His opponent out of international falls screaming at the top of her lungs, carrying a 2.5 lb cleaning weapon!!!! Kady the KRUNCHER!!!! 1 second later... all over, all over the floor... farewell Scorpino..