Labels: Central America, Fun With Language, gross, irritated, Romance
When I was staying in Guatemala at Lake Atitlan (Remember the Guatemalan toilet microphone?), my hostel dormmate mentioned that she had been horseback riding with "Jack"*, the older gentleman who was staying at our hostel.  Apparently he was an expert horseman and had a place across the lake where they gave him a good deal.

The next day I asked him if he would be interested in taking me to this special horse place so that I could ride.  We made plans to go, but also ended up having coffee together.  He told me about his deceased wife which was very sad, and then we talked about our travel history (as will happen over coffee at hostels) and then made more plans to get together that evening to play Scrabble.  We had dinner that night at a fabulous place by the name of Restaurant Fe (if you're ever in San Marcos).  I didn't beat him at Scrabble, but I came very close.  He was impressed by that.  Probably because he thinks all women are stupid.  The fact is, he was stupid.  He kept trying to argue that 'dem' was a word, because it was an acceptable abbreviation for the word Democrat.  He also pushed for 'prof' for professor.  In his defense, he is British.  In my defense, I am right.  Scrabble has never and will never allow abbreviations.

Anyways, based on that little blip, I'm sure you can agree that I actually won the game, because I didn't fight every little battle like I fought the Abbreviations Battle.

The more I hung out with him, the more I realized that he was kind of flirting with me.  He was at least 60 if not older and so I blew it off.  I was completely alone in Guatemala and really wanted to go horseback riding, OK?

"Jack" is one of these people who will say he speaks Spanish.  But he doesn't.  My Spanish is bad, but I can tell when someone is crap at it.  Trust me, he was crap at it.  His pronunciation was the worst part.  No, I lied.  The worst part was his propensity to correct and teach others Spanish when his Spanish was so bad.  This misplaced arrogant attitude translated to horseback riding too.  I could tell he assumed I would be a complete novice due to the way he kept coaching me on the most basic things.  I just sort of ignored it all and gave my horse the "YAW!" and ran on ahead to get away from him.  This only served to further impress him.  Also he assumed I spoke no Spanish and insisted on translating everything for me, and finally I just spoke over him and had full on conversations in Spanish with our guides.  Again, he was impressed.  I can only guess that his love for me just kept on a-growin', because I had to purposely avoid his attempts to be alone with me the whole day.

The whole point of this story is to give you a gross quote from Jack.

At one point during the day I caught a glimpse of my reflection and said, "ha I look like a boy!"

He looked at me, slowly, up and down over the rim of his glasses and said,

"There's something very non-boyish about you", (in the creepiest way imaginable.)


Later I found out he had been through all the girls at the hostel, doing the same dog-and-pony show.  These girls told me that days before I arrived, his girlfriend who had driven all the way from the US with him had just left him there all by himself.  He must have forgotten to mention her when he was garnering sympathy by telling me all about his dead wife.

This is the only photo I got of Jack and it's kind of accurate. 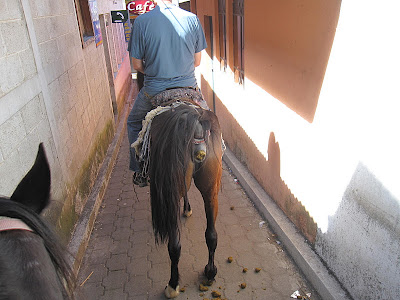 *Names have not been changed.

I wish I could have been a fly on the wall during your "date" with "Jack." That would have been hilarious. I would have sat back, eaten my tiny bag of popcorn and yelled things out like,"WOOO HOOOO! YEAH! RIDE THAT HORSE! SPEAK THAT SPANISH! YOU GO GIRL!"

Got your latest postcard. You crack me up.

Well, at least it looks like you enjoying the horse!

Thanks for stopping by my blog. If you happened to follow me today, would you mind letting me know? Someone followed but my GFC box isn't showing who - it's had a 2 week delay lately!

Hey, Kady. I never got my postcard. Hanna got one. I want the one with you in the blue lobster suit.