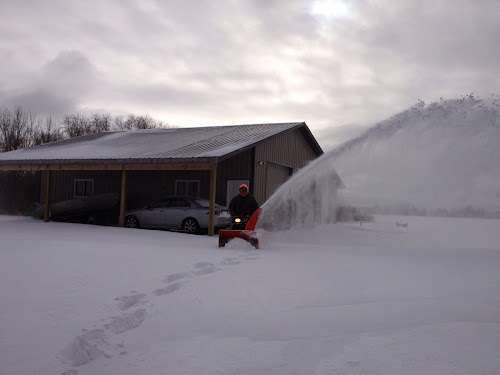 We had some serious snow last night and after my dad got it all plowed up an unidentified animal trotted up our driveway, peed, pooped twice and dropped little bits of blood everywhere and then ran behind the garage and into the woods.

This is like Christmas for my dad. What kind of an animal was it? What did it eat last? Why was it bleeding? Where was it going? We walked up the driveway to inspect the poop and get some questions answered. I told you he's always digging in animal poop!

Tomorrow those gloves will probably be hugging me. Ew!!

The verdict? Probably a coyote. There was deer hair in the poop, which was a good clue. Also he said it smelled just like coyote poop.

Posted with Blogsy
Posted by A Lady Reveals Nothing at 7:30 AM

Tell him that if you stopped taking pictures of him, he'd stop being famous.