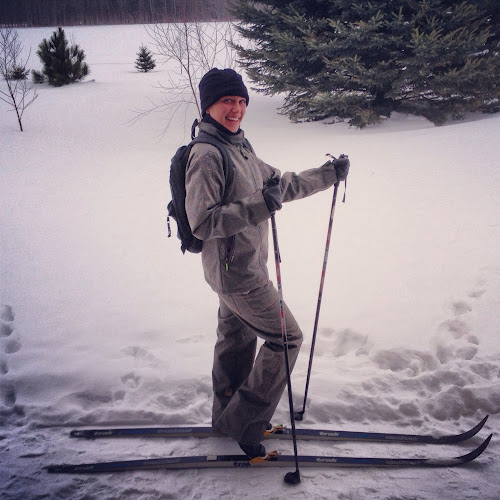 Today I cross-country skied over to the liquor store, on a quest for a couple of boxes of wine. Cuz that's how I roll. Anyway, the dumb dog followed me out the driveway. We have a very long driveway and to my knowledge lil' Rowdy doesn't go out past it and so I didn't send him home right away. Surely he'd turn around of his own volition...

Nope. He kept on a-following me as I skied into the ditch, carefully following snowmobile tracks toward town. After a while Rowdy ran up onto the road, which made me nervous and I also took it to mean that his poor little paws were getting cold from all the snow and so I convinced him to get in my backpack. Imagine a cute little dog in my backpack! That idea didn't last long because my zipper isn't strong enough to hold a scared dog. So he fell jumped out. He kept running next to me, ears flopping. It was pretty dang cute, this little "walk" we were on.

Earlier, my parents and I were driving down the big highway and encountered a little old man who had slid into the ditch. We helped him call a tow truck, but my dad went back to wait with him after dropping mom and me off. So I was hoping to see my dad drive by at any moment so that I could unload this dumb dog. No such luck. I was annoyed, but gave up and decided I was going to have to deal with Rowdy all the way to Percy's (actual name of our actual liquor store. Guy's name is Roger.)

We worked our way down the frontage road, and for the crossing of the big big highway I decided to stow my skis and poles in a snow bank by an old barn and walk. I picked up Rowdy and carried him across. As I approached Percy's, my dad's truck pulled in. He could drive Rowdy home! He could pay for the wine!

My dad hadn't seen me. So I threw Rowdy in the cab of the truck, and hid behind the store's ICE cooler. Naturally my dad would discover him and think he had gone crazy. Heh heh. Beads of sweat rolled down my forehead as I waited, excited. I lost my balance and fell backward into the snowbank. I tried to be quieter. This is the worst part of the prank, the waiting. I always break way too soon. I heard my dad come out of the store and thought I would burst. He approached. I almost peed my pants. He opened the passenger door to throw his stuff in. And then I died when I heard him say, "Hey! where did you come from?"

Hilarious things are happening up here in Roosevelt, folks.

Posted with Blogsy
Posted by A Lady Reveals Nothing at 10:53 PM

Next time my Rowdy follows me skiing, I'm going to haul him into my mom's car and see how it turns out. :)

And then you put your ski's in the truck and took the easy way home! (So much for that cardio workout carrying the wine.)

No way Chris. But I did make my dad carry the wine and the dog. I skied home.

So then Hal calls Me. "Dianne how did Rowdy get in the truck? I was sure he was not here when I left home."