I had romantic visions of riding bicycle on my entire trip through Eastern Europe, Sri Lanka, and India. And why shouldn't I? I became quite the hipster cyclist wannabe last summer in Minneapolis.

Well, it didn't quite work out that way and I only ended up going for one sad little hour-long ride in Nepal. One ride in almost five months. Pathetic! So in Kyoto, Japan when I saw a flyer in the hostel lobby for $2 off the $8 daily rate I agreed to it in my mind before I even considered the weather. Or the walking distance from my hostel to the rental shop. Who cared? I had nothing else to do.

Ooh I froze. Well, I had no socks. Or rather, I refused to wear the sneakers which had become attached to my feet in India and Nepal with their human feces-exteriors. I was determined to try to look a tiny bit cuter in Japan. No sneakers meant either flip flops or ballet flats, which could not EVER be worn with anything but the tiny little socks you wear inside to keep your feet from stinking.


Aside from the freezing weather, I had a blast and saw lots of Kyoto's sights. I went to my first Starbucks since leaving the US and saw the man with the extreme combover picking his nose. I went to the Imperial Palace but couldn't tour it because I didn't have a reservation. But that was OK because I rode all around their gorgeous gardens and I saw a man having a picnic with his cat and that made my day.

Then I rode up to the Kinkaju-Ji (the Golden Pavilion) and at a stoplight on the way met a handsome American on a bicycle who asked if I was on vacation. When I said yes, he said he lived here and then rode off. Well la-di-da.

Ooh my feet were cold. I stopped in a few gift shops on the way looking for socks. I was cold enough not to care anymore about socks inside ballet flats. Every pair was Hello Kitty and $10. Highway robbery!

The Kinkaju-Ji was fantastic. Absolutely gorgeous. I hung out there forever and imagined myself walking around in there in wooden shoes and a kimono 500 years ago. 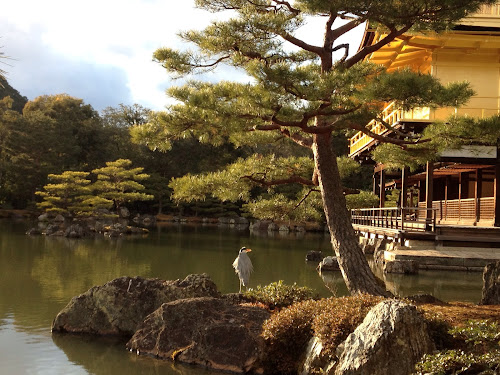 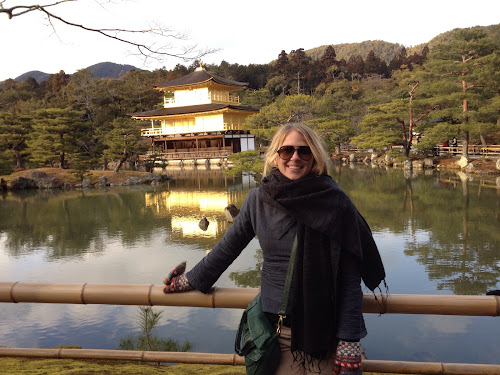 After that I rode down to another pagoda and the TV tower and another temple and in the end I think I rode for a total of five hours. It was weird, because it took me about an hour to figure out that Kyoto drivers do not want bikes on the road. You're supposed to ride on the sidewalk! Totally illegal in Minnesota. But, when in Rome...

Posted with Blogsy
Posted by A Lady Reveals Nothing at 12:29 PM

Very nice picture of the Golden Pavilion. LOVE the TREES!

Thanks! It's kind of hard to get a bad photo of that place.