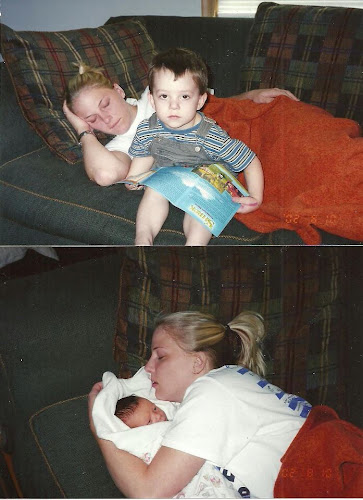 Apparently, I'm not the most attentive babysitter.

Even when I'm not really the babysitter. One time at a hotel pool party, my sister Kim asked me to keep my eye on Skeeter, who was happily playing in his water wings in the pool. He was so happily playing with his water wings in the pool, in fact, that I sort of left him in favor of a fooz ball game. At some point during that game, I remembered my dumb nephew in the pool and thought, "I should really check on him." I found him, in too deep, water wings off, on tip toes, water level at or around his tipped back head, jumping up every few seconds for a breath.

All's well that ends well? When in Rome? Six of one half dozen of the other? A miss is as good as a mile?

Posted with Blogsy
Posted by A Lady Reveals Nothing at 8:57 PM

Is there a reason you have no children of your own? One can only wonder.

When Murphy was born, mom & I drove into Mpls. to see her new great grandson. Dianne was there and mom was looking forward to seeing everyone. We sat down to play cards and Kady was still sleeping on the couch. Mom tried to get her into the card game. Needless to say........