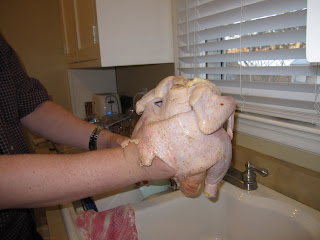 Step one: Find a guy who is willing to touch the inside of a nasty raw chicken. (and hopefully he will be willing to hold it up like a puppet for the photo.) Thanks Mark Spanagel! 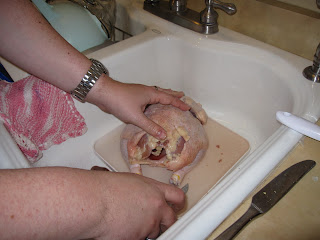 Step Two: Take 1 tbsp of salt, 1 tsp of lemon zest (which I recently found out is just lemon peel grated up), 4 garlic cloves, 1 tbsp of olive oil. Get that brave guy to rub this mixture between the chicken and it's skin. Shove a sliced up lemon into the icky inside of the chicken after you've removed the icky heart and liver and neck and stuff. Salt and olive oil the outside of the chicken and add whatever other spices you want and bake at 350 degrees for a half hour per pound. 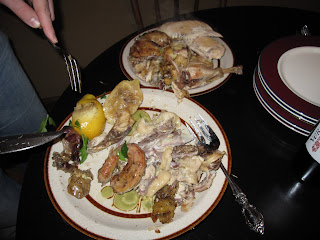 Step Two and a half: Get another guy to carve it up for you. Thanks Andrew Brooker! 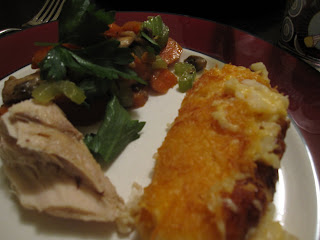 Step Three: eat. **Cheesy potatoes on the right can be made by taking one pound of hash browns, one pound of light cottage cheese and two pounds of grated cheese. Bake at 375 degrees for about an hour. Thanks Mark and Amy for bringing those over. YUM. 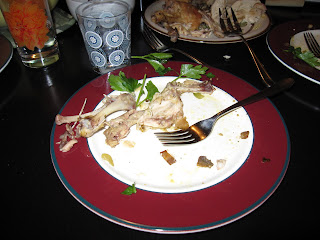 Step four, save those bones and make a yummy broth for chicken noodle soup because you are sick and it will taste good.
MMMMMMM
Posted by A Lady Reveals Nothing at 10:21 PM

Here's a helpful winter tip: If you leave a tortilla out for a week, you've got yourself a handy little ice scraper.

the lemon zest comment made me fall off my chair laughing. the chicken with the hand up it's butt made me never want to be a chicken with some guy's hand up my butt.

Apparently everyone in the world knows what lemon zest is but me.
Melissa Kasprowicz got a laugh out of it too.

When she called me from the grocery store because she did not know what lemon zest was. I was like okay-- do I make fun of her or do I just patiently answer her question. I opted for patience, I am trying to be nicer and more mature.

why thanks, "prettiest sister"

That looks so good, I love roasted chicken homade, or is it home made? Next time try a turkey, I know for a fact Prettiest Sister will help you with that, she doesn't even kringe putting her hands between it's legs to clean it.