Labels: Seattle / Chicago
So the first night we arrived was New Year's Eve. I'm not gonna lie. I love fireworks. So when I found out that the Space Pin has fireworks and it was five blocks from our condo, I was sorta excited. Then Jakey Jake and his Reasonable Traveler's Disposition stepped into remind me that we were getting up at 6am to go snowboarding the next day. So I reluctantly agreed to go to bed early. It wasn't easy either, because our condo was on a very busy street and all night we could hear revelers out there partying it right on up. It didn't help that we had some sort of air conditioning contraption ("Danger, Will Robinson") thing sticking out the window and that didn't provide too much sound proofing. Ever laid in bed, listening to a New Year's countdown, wanting to be sleeping but wanting to be watching fireworks?

So then we got up at 6am. I don't get up super easy in the morn', so this wasn't easy for me. But we got on the road by 7:20 (Jake wanted to be out by 7:15...you know me, always 5 minutes late.) We drove for about 45 minutes to a town called Monroe to meet up with Jake's friend Shea and then got in his stinky Suburban and started up the mountain. I felt bad for thinking it was stinky, and then found out it was because he bought it one week ago from a guy who was living in it. But not until the guy told him all about his nasty divorce and got a call from the ex and started the call with the I Love You's and the I'm Sorry's and ended it by calling the woman a B*tch several times screaming in to the phone. Shea said he got a great deal. Anyway the Suburban smelled like puke. But I digress. So it was damp in Seattle and drizzley up to Monroe and then as we climbed the mountain, it started to snow. Here are some pics:

I took this first one out of the window. That snow is as tall as the window on a Suburban truck. p.s. the window wouldn't roll back up right away. Thank goodness Cory figured out how to fix it. 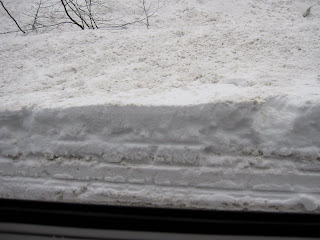 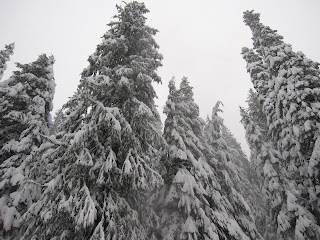 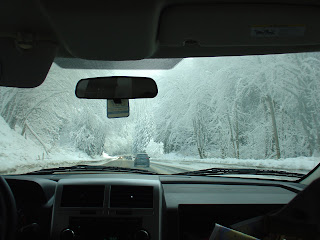 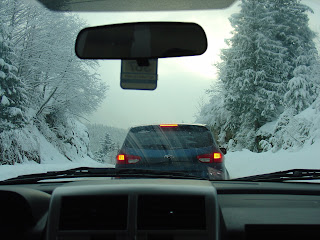 We were in stop-and-go traffic for about 50 miles and it took several hours. Shea was passing people who were spinning out. There were people stopping everywhere to put chains on their tires. There were even designated pull-over spots for chaining up. NOBODY knew how to drive in it. Nobody would let you in. Nobody would use the extra lane. Then they all used the extra lane and then they all created a third lane. NOBODY was coming down the mountain. A plow came. We passed some more people. Pretty soon it's 11:30 AM and we see this information sign. 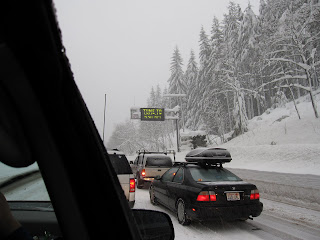 Also can you see how deep the snow is? It's as tall as that Honda! Anyway, the sign says: "Due to avalanche, Stevens Pass closed" HA! An AVALANCHE!! All that driving and we didn't even get to go snowboarding. And so I was a teensy bit disappointed but it was a funny little adventure. 4 hours on the road. In a stinky truck.

We decided to go back to Seattle and salvage what we could of the day. We went back to Monroe and had nachos and wings and beers and bought some discounted passes, and then headed into Seattle and went to the Space Needle. But Anna called it the Space Pin. And then eventually the Pin Space.

Posted by A Lady Reveals Nothing at 10:04 PM

you know me and words, I get them confused sometimes. Gotta remember english is my second language :)

Not to mention I fell asleep in the back of the nasty suburban and woke up with my drooly face stuck to the sticky seat. Please remind me to bleach my face.

5 minutes? jake was lucky, you are usually at least a 1/2 hour late. sometimes half a day. one time for a meeting that went over time by 10 minutes, you complained to ben, and ben was like you showed up 20 minutes late!?!

its all I can afford and I like it. I didnt know it was so nasty back there or I wouldnt have offered to drive. you suck

ha! I knew you would read it...somehow I know everytime I talk about somebody behind their back (or keyboard) I get busted! Good thing I was somewhat diplomatic about it...

diplomatic huh? Well hopefully you never become a diplomat or I fear there will be alot more wars in this world. Being out west sometimes makes me forget that Minnesota nice is actually MN mean. Nice meeting you guys by the way, it was fun snowboarding with Corey. If you guys are ever out here again and need a ride call 1-800-HERTZ

I would have been ticked to miss out on the fireworks for a big fat nothing. Love, Jacqui

oh, now that I know you read our terrible descriptions of your actually not so bad suburban I feel bad.

Please know that everything we say is ALWAYS exaterated at least x10 to make things more funny you know, we all compete to be funny.

By the way, thanks again Shea for giving us some good material/ride sorry it was on your expense.

am I dumb? I thought Shea was being his hilarious self, and not serious at all?