Back to Iceland for a bit. 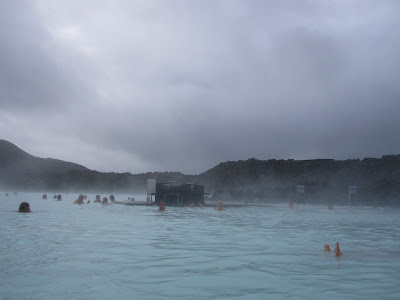 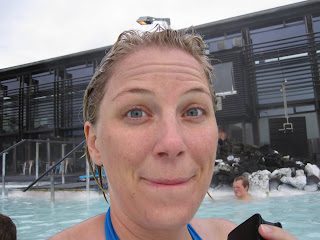 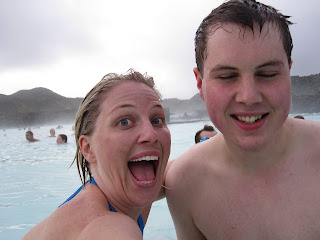 So one of the things that Reykjavik is famous for is it's hot springs, which are actually geothermal situations just below the surface. They have tons of them, and lots of volcanoes and I guess it's because they are on a major fault. Anyways, we got to go to the "Blue Lagoon" and soak for hours in this water, that is high in Silica and minerals and human excrement. It was pretty fabulous, but it was also highly disturbing because there were so many people in there. Ross said, "just think of it as a human stew". EW.

It was equal parts fabulous and disgusting. You germ freaks out there will get me on that one. It was gorgeous. Rainy, chilly day. To soak in a virtual hot tub and spread white gunk on your face for a mini facial and have the sleet hitting you in the head, but warm under the water was so so so cool. But to move your arm through the water and get a long hair with several snarled, "sub-hairs" attached to it and also to see people spitting, people with boogers hanging out of their noses...etc. Well it was too much. I lasted about 45 minutes I think before I had to call it quits. It was very nice and I would do it again. I just had to keep thinking about that shower at the end. I think the pros outweighed the cons. I *THINK* they did.

p.s. I think Ross gets embarrassed when I take our photo like that. I have several with his shy closed-eyes smile. get used to it, because I'm going to post lots more over the next two weeks.
Posted by A Lady Reveals Nothing at 1:10 PM

Hi shnookums! this is ur love muffin ethan :) hope u be havin fun.(this is for ross not u kady......i guess i hope ur having fun to :)) im still jealous cuz im here and not there. if u were here and i was there then i would be fine. was ur beer good? o! i got some mouth calls for coyotes. they're awesome. lets go get some yotes when u get back. o ya and imma see if i can take grant to ur house to punch the punching bag tomorrow. he gots ta get out some stress. o gabe loves u. k i leave now bye.

Were the people around you zombies or something. They sound so dirty and rude. Foreign people in their native land can be so gross.

Dear Ethan, I would read your comment if I could...but it doesn't appear to be in English?