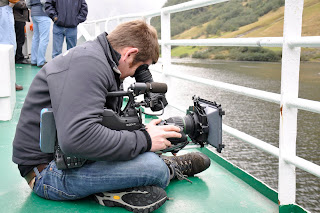 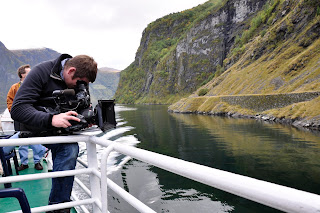 So the fjord boat stopped a couple times along the way to pick people up and drop people off, and at the first stop I noticed two guys getting on the boat and they had a huge television camera. Ross and I had parked ourselves in the front of the boat on the top floor and I was taking pictures off the side of the boat. The camera guy asked me if he could film me taking pictures. So I was like yes please! And he did and I had to sign a waiver and he said that the Discovery Channel is doing a 30 part series, of which the fjords are one, and I might be on it! Later on, Ross and I were filmed together, pretending to take pictures. Ross signed a waiver too and so check us out on Discovery Travel!! p.s. I think my jeans make my butt look big and the angle of film he was taking was like on the ground up towards my butt of me leaning over the boat edge to take a picture. So what you might see on Discovery Travel is my big a##. Oh well.

Later, his partner dude asked if he could take some publicity stills of me so I let him, they looked like this: 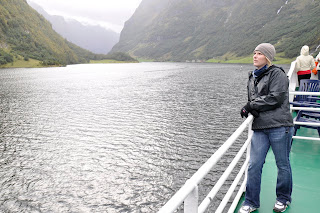 Do you know how hard it is to be SERIOUS in a photo if you are ME? Its impossible. But the point is that they take "stock photos" and then magazines buy them and then you might get in a hemmerhoid ad or something. So please check me out in a magazine. Not sure which one. 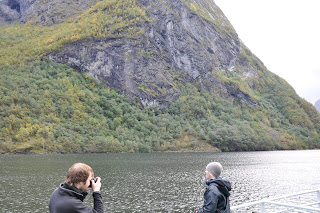 Did he take you out for dinner after?

What's the point of being a creepy starer if you don't update every couple of hours? Where are you now? Where were you yesterday,etc. I needs to know these things.Uncle Aaron and Dad Aaron [same person]