The ferry to Stavanger and to Preikestolen

I didnt take any pictures this day because it SUCKED. First, we had to walk, in the rain to the ferry and then as we were getting on the boat, we had to say our name and destination into a tape recorder. Why? Planning on sinking? Is this so you can tell our parents that we're DEAD?? It took about 5 hours to get to StaVANGah. Halfway there we switched boats which we didnt know we had to do, but some nice lady picking up garbage told us to get off the boat. So we did. And then we got on another boat. I didnt expect it to be seasick type boat stuff but it was, the waves were crazy.

The sea, she was angry.

Anyway I just typed that to make Ross laugh and he did so there. When we arrived in StaVANGah, I knew that we had to take a ferry to Tau, but had no tickets for it or anything, and we sort of had to figure it out, but the ferry office desk was closed. And there was no place to buy tickets in an ATM type machine, so I was like, "WHA?" I found a timetable that said there was a ferry to Tau at 15:25 which was around an hour away. We just had to go to "linje 5" which I figured meant Line 5. I saw lines 1, 2 and 3, and thought line 5 was around the corner so we ended up going to a little gas station-y store and buying nuts and candy bars because we knew we were going to climb a mountain the next day and wanted to buy snacks. Then we went back to get in line 5 but there was no line 5. So we asked a guy and he pointed and so we started walking to a different harbor...but halfway there Ross was like, this doesnt seem right and it really didnt so we turned around and walked back and just then we a huge passenger ferry arrive at what must have been Line 5, but it didnt say that anywhere. Sometimes I feel like such an idiot.

So we got on that ferry, and then by some miracle there was free internet so I googled on my iTouch how to get from Tau to Preikestolen and it said to take a bus. So there was a bus right outside of the ferry and everybody was getting on it and Ross and I were last so I get on and hand her my money (there was a sign that said, to Preikestolen, 65 NOK per person, about $10) and she said, "I'm not going to Preikestolen". Then I got confused and said, who is? And she pointed to a big white bus that already left but was stopped waiting for the ferry traffic and so Ross and I got off the bus and I didnt want to run and act a fool so we briskly walked to the other bus, and just as we got up to it, it drove off. The timetable for the buses said that the bus to Preikestolen wasnt until 7:05 so I am comforting myself to think that the white bus was not for us anyway. So now, we have THREE hours to kill and we're starving, so we decided to start walking. Charlies Pub is right up there. But we got there and it was closed. Then we walked down a little road and a couple pushing a baby came the other way and we asked if there was a restaurant up there and they said, NO, but there is up there, and pointed to the direction we had previously been walking. So we went up there, and went to the gas station they suggested but they only had candy. No go. went to the Lleland Hotel restaurant, but they didnt open until 6pm, and their prices were like $40 for a meal and 6pm was now an hour and a half away. So we kept walking. Nothing. Nothing. Nothing. Then a dude told us there was a pizza joint up ahead and so we walked some more. p.s. I hate how heavy my backpack is in times like these...
anyways we found the pizza, it was the Lamb and mayonnaise one and it was FANTASTIC. So the entire craptastic day was saved. At least in my opinion. and the ferry wasnt so bad because we watched 9 episodes of the Office.

So far we watched the entire season 5 and are almost done with season 3. After that I have flight of the Conchords season 2 on my iPod and I betcha were gonna finish that too!

So we finally got on the bus to Preikestolen, and it was kind of full so we didnt sit by eachother, but it was pretty gorgeous out the windows. Sleepy little boat towns, and the sunset was quite orange and gorgeous. When we arrived at the hostel in Preikestolen here is what we saw: 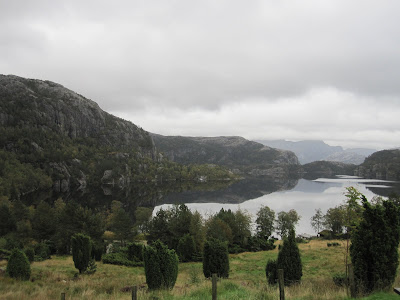 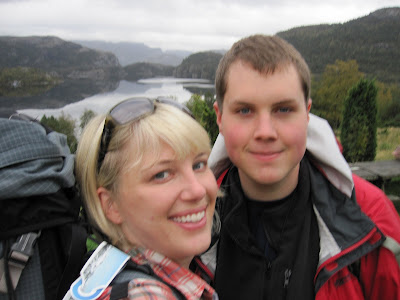 The room, though was another story. 5 feet by 8 feet. Top bunk bed two feet from the ceiling. Sink behind bed. Nowhere to put stuff, nowhere to hang stuff. Must. get. out. of. there. 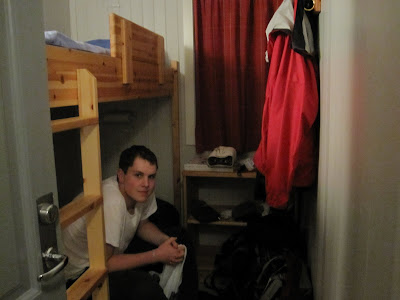 Oh yes, I'll take a shower!!! I havent showered in like three days, I'll go take a wonderful, cleansing, warm, wonderful shower. and then I saw this: 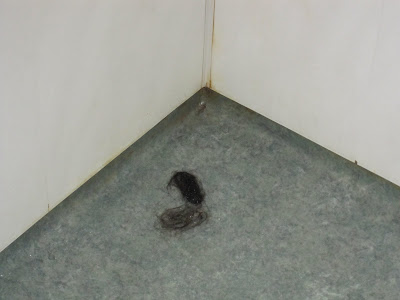 So I went downstairs and found a better shower and I let Ross go first and he told me it was cold and I wanted to cry. He was right. Cold shower.

p.s. that night I woke up in a panic at midnight and felt so claustrophobic I couldnt sleep. I kept imagining the place on fire and we wouldnt be able to get out. And I kept hearing noises that sounded like somebody setting the place on fire. Whats that? A cigarette, yes its a cigarette. Eventually I fell asleep and then the next day we had to get up early because they had FREE BREAKFAST!!!!!

What a great bunch of pictures. It's nice to be able to keep up with your adventure. I feel very fjordtunate. Aaron. Oh yeah, I loved the"the sea,she's angry today" bit. I always say that about the little lakes around here.

hey you guys im so jealous but im going when i can eat for free so there im sharing your blog with people from work debbie says im stopping people on the street and going hey do you want to read my niece and nephews trip ?????? and the big (norwegian word for speed) says just because she sends the most fab treats in the whole wide world you musnt feel the least bit obligated to get her anything or some little trinket or chocolate or whatever well i guess thats all for now jph

this was a downer. hair balls and rooms the size of a bathtub. I panic reading it. walking: who walks? that's so euro trash. (I can just tell that I'm the only one giggling over my walking joke).