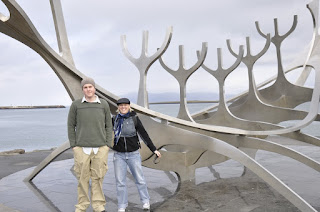 So we are here and we are killing time because our flight arrived at 6:20am and we can´t check into our hostel until 2pm. We dropped our big backpacks off there though and walked to a bus stop and took the bus into town. We walked around for an HOUR trying to find a place to have breakfast. Couldn´t find anything. Finally I had to get out our little tourist map and follow it up to the city center and we ended up finding a place where you could get a sandwich. Every food place we found before that doesn´t open until 11am on Saturdays. Now, is that because everybody stays up late on Friday night and drinks and then sleeps in on Saturdays? Doesn´t anybody want breakfast in the morning? That was weird.

The plane ride over here was about 6 hours. I slept for most of it, but Ross didn´t sleep at all. I offered him my drug cocktail of Adavan + Melatonin but he wouldn´t take it. So I have jetlag but he really has jet lag. Poor thing. For us it is basically 6:30 in the morning right now, but here it is 11:30. We just want to go to SLEEP. After that, we´re going to try and go to the hot springs. Ross just accidentally withdrew way too much money from his account because their $20,000 option (about $200USD) is listed like $20. on the screen, so he thought it meant $20 dollars, but instead it meant their $20,000. They put commas where periods should go and periods where commas should go. Confusing. Also this key board has all kinds of letters that don´t belong on a keyboard and I am trying to avoid them.

I can´t upload photos here, sorry...there are no USB ports to this terminal. So you´ll just have to imagine the awesome photo we got of ourselves at the Minneapolis airport in the Viking thing with the heads cut out and our heads in it.

I was so worried on the plane that the people next to me were going to have to get around me to go to the bathroom that I couldn´t really sleep, and they never did need to go to the bathroom anyways. I said I slept the whole way and I did, but like interrupted weird plane sleeping. So like I said, I´m tired. This post might not make much sense.

We saw a cute little old man on his bike, who had a mean growl on his face, and so I smiled really big to cheer him up and instead, he just stared at me the entire way by, me smiling, him growling.

Another little old lady wouldn´t smile either. What´s up with that?
Posted by A Lady Reveals Nothing at 6:23 AM

Way to go, Ross, take hugs not drugs! They didn't smile because they had no teeth. Just a thought. Love, Jacqui