Labels: Scandinavia
Today was kind of a big day. First, we slept in until 11am. That was kind of an accident, but was mostly because we came back to the 'flat' at 8pm because we were totally tired and then we had to watch the Emmys until 11pm and then we slept twelve hours. But the good news is we got to see all the writers who won Emmys from shows we've never seen. It's always good to get English TV abroad though...

Anyways we got showered and walked to the train station and took a train plus a bus to see the ski jump which is currently under construction. It was pretty cool to see though because it sits up on top of the whole city and you can see all of Oslo from up there. Also when the 2011 Ski Jump competition is on TV I can bore anybody sitting next to me with the comment that "I've been there!!" 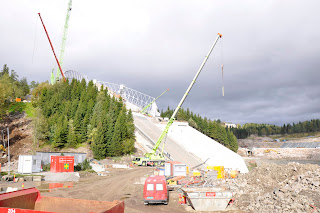 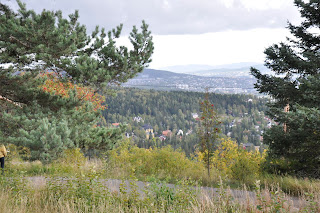 After that we took the bus and train back to the city, and walked
one hundred miles to get to the National Art Museum so we could see the Scream. That was pretty cool. They wouldn't let me take a photo though so you'll have to imagine it. Edvard Munch seemed like a pretty dark soul. They had a room full of his stuff. I really liked it. They also have a couple of Picassos, some Gaughans, Cezanne, Degas, Manet, etc.

From there we walked another hundred miles to get to a neat lunch cafe place where we paid $20ish for meat and potatoes. It was really yummy.

And then we walked another hundred miles to get to the Opera house. That was pretty cool. You can walk all the way to the top of it on these stone ramp things that are part of the architecture. You could see a lot of the shore and city from there too. 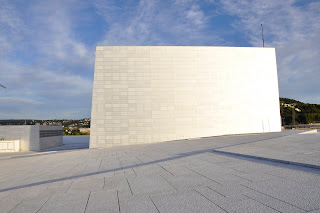 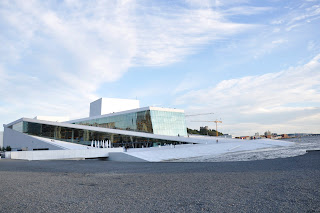 And then we took a nice walk through the bad neighborhood where the junkies and the prostitutes hang out. Apparently it's only illegal to buy a prostitute so only the buyer will be arrested. So the ladies just kind of hang out no big deal. We saw a dude totally strung out laying there. The reason for this nice walk was we wanted to tour the fortress where in the old days they would watch for bad guys coming up the fjord, and also put prisoners in jail. 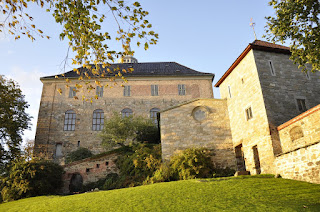 Then we went for a beer and now we're home. I think literally without exaggerating we walked maybe 7 miles today. Oh, and I pooped for the first time since getting here.

Feels good.
Posted by A Lady Reveals Nothing at 3:35 PM

your literati is quite "moving".

Oh my gosh, I'm so glad you pooped. I feel like I'm on vacation with you! Thanks for the great blogs. Now I never have to go to Iceland and bathe in pube soup. (But I still kind of want to.)

It's so sad that Gr. Grampa Peter had to leave due to starvation, it's so beautiful! And he landed in Plain-Jane Roosevelt/Williams (whichever) Minnesota, where the prettiness doesn't even come close. It's pretty, Dad, don't get mad about your proud homeland, his was just better, except for the invention of the shitty Lutefisk debacle.

Love your daughter (who isn't working hard enough on her swearing),
Kasey