Labels: Scandinavia
From Voss we took the train to Bergen, and I saw from my online confirmation from the hostel that its about 300 meters to walk there from the train station. And there is a billboard at the station telling you how to get there. We found the billboard and started walking, in the rain up to the hostel. The billboard said 200 meters. Anyways, we walked and walked and walked in the rain and didnt find it. After about what we thought was 200 meters or 300 meters but ended up being about a half mile, we asked a girl and she said we should have taken a right at the train station, and it was just 200 meters to the right (instead of going straight). So we walked a half mile BACK to the train station in the rain, and sure enough that billboard said take a right. So we went to the hostel, found out that our key was at the bar next door, had to go there, then back to the dorm room, saw that it looked like this: 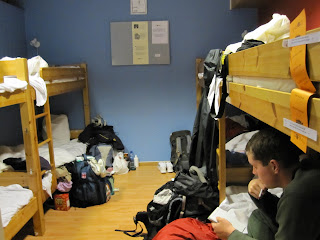 and there was a big sign saying help us avoid bed bugs, and so I was just irritated. I put my bag down in the room, and asked Ross if he would please join me at the bar, where I drank 3 beers. Ross also drank beers and he can tell you how many. So anyways, after that, I felt better, but did NOT want to go back to that dorm room!!! We had to share with 6 other people. If you can see in the photo there are 8 beds. So we finally did, and it was 11:30 by now and then when we got back all the other 6 people were sleeping with lights out. OOPS. So we had to QUICK get in bed, spread out the sheets (at least this place gave us sheets) and put the pillow cases on the pillows, and try not to make ANY noise. It was also 1,000 degrees in that room by the way, so after all my bed was taken care of I had to take off my jeans and bra because it was so hot. And then at 4:30 in the AM I woke up with a start because I had to pee because of all those beers. So, should I go? I would have to put my pants back on. I would have to find my flip flops in my back pack. I couldnt sleep. It was SO hot. What to do? Finally I threw on my jeans, skipped the flip flops (EW!) and went to the bathroom, 5 feet from the dorm, with 2 inches of space below all doors and if I woke anybody up putting my jeans on, they heard me pee, wipe, flush and wash my hands. And say EW 7 times. p.s the next morning I found my bra in Ross' bed. hmmmmmmmm

I think it fell behind the bed, and landed on his when I took it off. I found it when he was in the bathroom thank goodness.

The next night at this hostel we met some british guys who caught a fish in the harbor and cooked it themselves. Also we met a married couple from Australia who are in their 16th month of travelling and dont know when theyre going home. They have been everywhere.

You can google search their blog at "world nomads vanessa".
Posted by A Lady Reveals Nothing at 7:38 AM

you are the best world traveler!