Labels: Scandinavia
We put the fun in Funicular! We went up to the top of Floyen mountain in a funicular, or basically a train that goes up the side of the mountain. I wasnt expecting it to be like Valley Fair, but it was. We sat right up against the glass, and watched backwards as the whole train shoots straight up, but it bounces when it stops and it feels like an amusement park ride.

When you get to the top there is a souvenir shop (daaaaaaaaad, I got you somethinnnnnng! -Kady) and a walking park with an Activityslopen, or something like that where there were all these creepy wooden heads in the woods, and I guess they were supposed to be fun for the kiddies, but I thought they were weird and scary. Plus there was a statue of a rabid dog feeding her babies and growling at you: 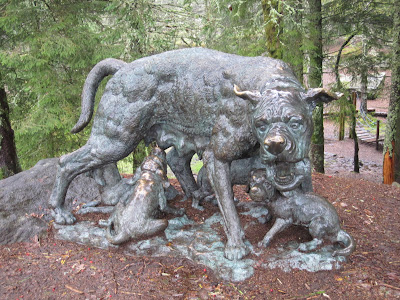 How is that supposed to be for kids? and then we found a tree with a note on it asking what mountain are you on right now, and there were fun slides and tubes and it was all about kids. I dont get it. Anyways, we found statues that looked exactly like us (if ross has his hood up, but he had his hood up the whole time in Bergen because of the rain.) Check it out! I was so obsessed with getting our pictures, we put my camera on a log and set the timer...I think Ross might be getting sick of me having to have pictures of certain things? I was going to ask somebody for help but there was NO ONE AROUND in the CREEPY woods. Glad Ross was with me. 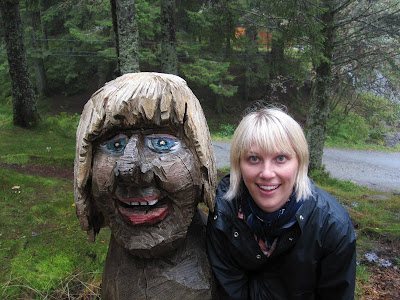 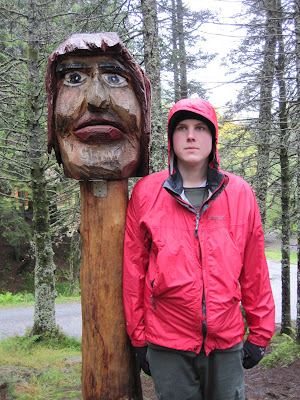 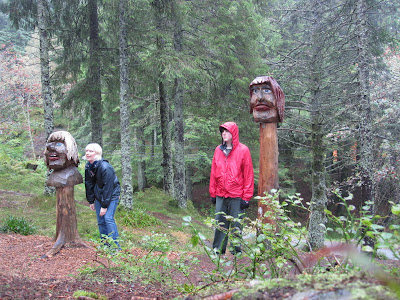 And this one is just for fun. 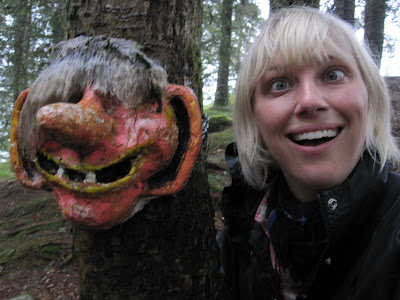 Here we are at the top of the city: 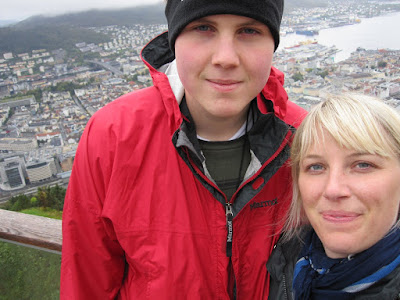 Posted by A Lady Reveals Nothing at 10:04 AM

The head carving portraits are my favorite photos so far - love them!

I think the just for fun pic is closer to looking like you than the first one.

I am sorry but they look too much like you guys! It is like someone was making a caricature of you in the woods.