Labels: Scandinavia
In Bergen we went to a fish market, and bought a kilo of smoked salmon and a half kilo of crab claws. It was delicious. And about $42 we figured. We had walked around Bergen and just sort of happened upon this fresh fish market. It was amazing to sample all kinds of stuff and Ross even ate raw salmon, like four kinds. We had whale too. Apparently that is cruel and horrible, according to our new friends at the hostel, but I didnt really know that. The girl at the fish place was so nice and she said it was their most special treat, and so I felt special and ate it. Plus she was from Espana and I tried to use my Espanol even though I couldnt remember anything! Sorry, Shamu. En Espanol, "Lo siento, Shamu Pequeno"

We decided to eat there, and at first thought we would just carry the meat away and eat it later, because it was only 3pm and we are trying really hard to budget our time and lunch clock because we only want to pay for food twice a day if possible. Well after thinking about it we realized it would be best just to eat the salmon there, and then decided to buy more stuff and thats why we got the crab claws. 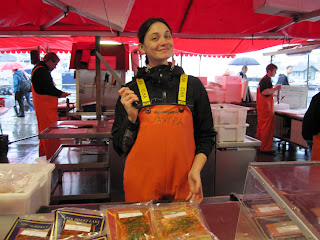 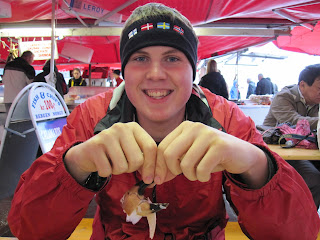 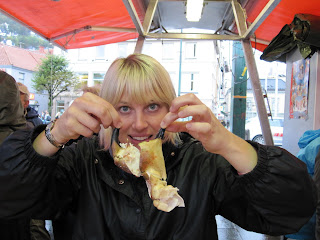 We did end up bringing about a third of the salmon back to the hostel and the British boys helped us finish it before they cooked their own fish they caught. We were worried about it being in room temperature for three hours. Ha! That was before the pizza incident. Three hours, schmree hours. I wish I had that salmon back right now I would eat the whole thing, even if out overnight. Kady hungry.

While we were sitting there I saved two people from sitting in bird crap. They were just about to sit down, and I screamed, "WAAAAAAAAAAAAIT!!!" and pointed to the bird crap and they were SO thankful. And then a tent tipped over from the rain and a ton of water poured out onto the ground and everybody was like, "WHA?" and we were all, "HUH?" and it was awesome. This was after we realized that all of the museums were closed and would be closed on Monday (which is why we are in Bergen right now -three days later - and killing tons of time at the internet cafe)... 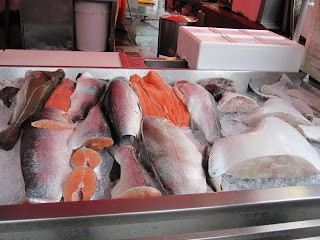 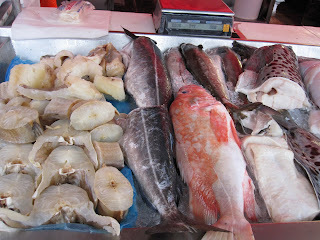 Posted by A Lady Reveals Nothing at 9:53 AM

Don't you watch 'Whale Wars'? I think it is illegal to "whale" anymore, internationally, it's just not being enforced. But there is a International Whaling Commission trying to stop the "cruelty" and stop extinction. Green Peace wishes you would throw it up, and beg forgiveness. Feel bad yet?

PS: how can you guys afford almost $100/day on food? You must have thousands of dollars, anyone reading internationally should totally rob you.

We are losing lots of weight, that is how we are affording to eat. Trying to only eat twice a day. Today we only ate once :( And it was like $30.