Labels: New Zealand
So I finally checked out of my free luxury hotel room and decided to go to the Art Gallery and the World's Steepest Street in Dunedin just so I wouldn't miss them.  There was a neat exhibition of the "hidden and unfamiliar" in the United States which included photos of KKK members, an inbred mentally retarded white tiger with a pug nose so it had a hard time breathing, etc.  The world's steepest street is definitely very steep.

On to Omarama.  Sounds a lot like Obamarama to me.  They have towns here called Clinton and Gore, so why not Obamarama?  I'll see about speaking to the mayor.

And then on to Mount Cook! It's really pretty, and is the tallest mountain in New Zealand. it has a very snow-capped top, and is usually shrouded in clouds, but not when I saw it! It was very beautiful. On my way out of there I decided to take the trip all the way to Lake Tekapo and stay there, since it's one hour further down the road. Saw another couple of hitchhikers, this time a girl and a guy, the guy was only in a T-shirt and it was freezing out. It was totally dark. Turns out they locked their keys in their car and needed to get to Lake Tekapo. We ended up all going to the same backpackers hostel and I shared my food with them. Sorry, guys, you'll just have to endure ONE MORE DAY of me having a car and the possibility of being murdered by a hitchhiker. I leave for Bali on Sunday!


This was the view from the mountain lodge I stayed at in Lake Tekapo. 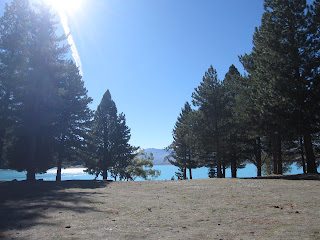 Posted by A Lady Reveals Nothing at 4:31 PM