Travel's Seedy Underbelly. And if not Seedy, at least Inconvenient.

Labels: fart, pee, SE Asia, Singapore
So there is an unglamorous side to travel. And that unglamorous side is actual travel itself. Getting from A to B. The days when you have to repack your backpack and suitcase for the thousandth time, strap it on your back, get on a bus or train or hail a taxi cab, get to the airport, carry your stuff up to the impossibly long check-in counter line, wait, wait some more, and then carefully negotiate boarding with the check in counter representative.
Malaysia Airlines for example allows (per their website) one checked bag at a maximum of 20kg. I have two checked bags at approximately 16kgs each. That puts me at a total of 32kgs. When I checked in at the Bali Airport, the woman told me that I was 5kgs over the limit, and that it would be $7 US for every kg over, or $35. I expected this because I have two bags and not one. But then I got real cheap and decided there was a bag inside my backpack filled with chargers and adapters that is quite heavy and so I pulled it from my checked luggage and moved it to my carry-on luggage. It couldn't have weighed more than 2kgs. But I figured that was $14 saved. Once I took it out, surprise! No more being overweight and she didn't charge me anything. It's so confusing and arbitrary. Like since when is 32kgs only 5kgs over the limit? According to what information source are you allowed 27kgs? ARGHHHH...
So today, I am flying from Singapore to Bangkok, via Kuala Lumpur. I was fully expecting to be hassled at the counter and pay excess weight fees. This time, nothing. No mention of excess weight, or excess baggage.
But I'm getting a tiny bit ahead of myself. You'll recall that I bought a suitcase in Melbourne because I was having trouble zipping my backpack shut? Well, it was pertinent at the time, and I appreciated it in New Zealand where I ended up having to buy long johns and a sweater, and borrow woollen hat and mittens. But now that I am heading into SE Asia to meet my most miserly friend, who is only bringing carry on luggage, it's just not going to be possible to lug it around on 10-hour bus rides and bring it to the hostels we plan to stay in. So, my mission in Singapore besides finding good food was to repack my bags in such a way that I could drop one in Bangkok. The plan is that I will bring it to a storage facility, pay $3 US per week until my friend goes back through Bangkok 7 weeks later on her way home to Vermont. She will pick up the bag, fly with it, and then Nancy will bring it from Vermont to Minnesota for me. Brills, eh? *IF Bangkok doesn't go supercrazy and decide to shut down the airport due to rioting and whatnot, but that's a whole different story.* So I loaded up the suitcase with more than 75% of what I brought on this trip. I just didn't need most of it. Add to that the fact that I got sick of my clothes. So sick that I went to Chinatown in Singapore and bought 4 dresses and 3 shirts for less than $100 US. I wore one of the shirts out of there and asked the shopkeeper to throw the one I was wearing away. Ew.
So, because I have decided to store my suitcase in Bangkok for 7 weeks, and because I can't be bothered to figure out how the built-in lock works, and because I'm more than a little concerned about the safety of its contents, I have to become one of those people that I hate. You know, the ones who shrink wrap their bags at the airport? So the taxi cab drops me off at Terminal 2, which is where I am flying from. But I can't find a shrink wrap machine. Lady at info counter says shrink wrap is only available at Terminal 1. Where is that? I ask. You can take Sky Train, she says. So I stop at snack counter, buy curry chicken rice and iced coffee for $6, eat all but the chicken (suddenly I'm a vegetarian) and then head towards the Sky Train for Terminal 1. But the sign says the Sky Train is not operating. So I find the walkway to Terminal 1, which is basically through a car park, and is not a "walkway" at all. It's a 600m walk, in the hot 37 degree (approx 100 Farenheit) weather. When I am halfway there, I look up and notice that yes, the Sky Train is fully operational. By now my back is wet with sweat under the backpack, my right bicep is going to explode from being fully engaged pulling/pushing my suitcase on wheels, and I have to go pee really bad. But, I got my bag wrapped! For $10 US. Then I took the Sky Train back to Terminal 2, checked it all in, did NOT have to pay any excess baggage fees, and then finally went to the bathroom. 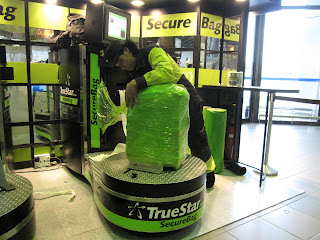 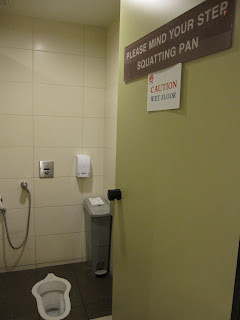 I had $33.85 left in Singapore dollars, and was planning to go to the money change, but on my way I stopped and checked out the book store. I'm kind of desperate for a new and very good book. My friend K. mentioned the Scarlet Pumpernickel wait Pimpernell, yes the Scarlet Pimpernell on facebook and that is what I wanted to find, but of course they don't sell that kind of classic literature at the airport book store. So I scanned the shelf through Jennifer Wiener and Sophie Kinsella, and that's when I spotted this guy: 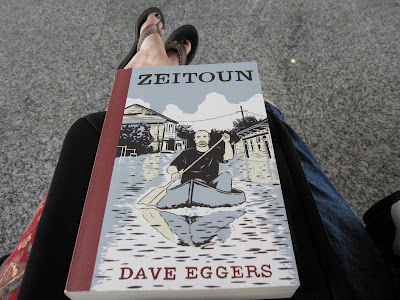 *And yes, that is me, sitting in a reclining airport lounger.

I LOVE Dave Eggers. I didn't even know he had a new book out. Or maybe it's not even new. I don't know. I haven't seen it before. I was so excited I ignored the price tag. Books are crazy expensive here. I got it up to the counter and the total cost was $33.35. I gave him all the rest of my money and pocketed the 50 cent piece as a souvenir for my nephew Miles. Oh well, at least I didn't have to go to the money changer. If you're interested in a book suggestion, read What is the What? by Dave Eggers.  Remember I read it back in 2008.  I'll let you know how this one turns out.

And now, it's time to get on a tiny little tube whose ventilation is such that only recycled fart air will enter my lungs for the next 4 hours, a tube that will hurtle me through space and time to a city called Bangkok, where at least five explosions happened this morning and one Western woman was killed.  But that might not be true because there are also reports that it was two foreigners and they were only injured.

Who knows?  Love you mom and dad!
Posted by A Lady Reveals Nothing at 3:33 AM

My coworker says to avoid large demonstrations and don't wear red or yellow shirts. You'll be fine. His wife is Thai and they go there several times a year.

Dont eat the rats either. Makes everyone a little sick.