Labels: near death, SE Asia, Singapore
So this will probably be pretty deep for some of you, but today I came to an obvious realization.  One that is so obvious we forget to remember it all the time.

People in other parts of the world aren't so very different.

I decided this today on the public transportation system.  I was staring at a little girl of Indian descent, dressed in a pink little dress with Dora the Explorer shoes on.  She was gab gab gabbing at her dad, and repeating everything the announcer said.  She reminded me of my little niece Miyo, and a thousand other little kids I know back home.  So then I started staring at other people.  There were grandpas and grandmas.  There were teenagers on the way home from school.  There were pregnant ladies; emo early-twenty-somethings with their headphones on so loud I could hear the music; old dudes picking their noses; business people on cell phones.

Singapore is not so diverse a city as, say New York City.  It's people are mainly of Malay, Indian or Chinese descent.  There's not a ton of Western folks, but there are a few.  I know, Deep Thoughts, by Jack Handy.

It's true that lots of things are illegal here.  Meaning, you can be fined for breaking certain rules, like chewing gum, eating or drinking in the train, spitting on the sidewalk, not flushing the toilet (seriously).  Today I bought some rolls at a yummy bread place.  I was totally eating them in the train station, up and down the escalators, up and down the corridors.  Later I heard an announcement that it's not allowed to eat or drink in the trains or in the stations.  Oops. 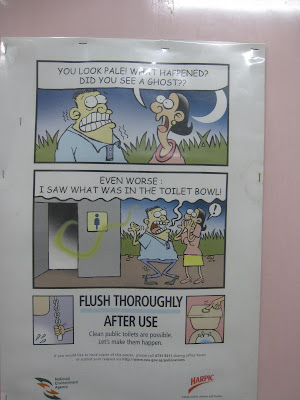 There's a magnet that has all of the illegal things, and then under it, it says: "Singapore, a 'fine' city".  I didn't get it for a whole day.  Get it?  Fines for everything.

Oh, and yesterday, I went to Chinatown. I walked around this indoor shopping area for a while and then decided to leave, cross the street and explore a little bit and that's when I ended up meeting those girls who were stuck here in Singapore until the Ash Cloud over Europe blows over. Anyways we were having some Tiger Beers and chatting and then this terrible burning smell blew by. We got up and looked over and the whole shopping center was billowing black smoke. Apparently one of the storage units on the top floor caught on fire and it even made the news here in Singapore. I'm going to add this entry to my 'near death' experiences, because, well you never know.
Posted by A Lady Reveals Nothing at 11:53 AM

Kady, that black ash cloud....will you be able to come home?

And as to the "fine" city, that reminds me of the Popeye movie where they were fining everyone for everything. And didn't you just comment on the family picture in the Popeye style...."I loves me family"? cool

Hey KD, you might have heard how Sing. came to be the way it is. If you travel through SE Asia you will quickly understand. Sing. wanted to be the banking capital of SE Asia but because of all the Chinese immigrants flooding in and looking for work, the hygienic conditions were deplorable and many banks and businesses did not believe it would ever rival Hong Kong b/c of the filth. Immigrants would literally poop in the elevators b/c they did not know any better or b/c they didn't care. Sing. decided to take action by building public bathrooms and then fining/punishing the most egregious offenders. It did not take long to clean up the city. They rarely go after anyone these days, but every once and a while they make an example out of the worst violators. He executed an Aussie a few years back for smuggling heroine into the country.
Anyway, in some parts of SE Asia they spit everywhere and literally will take a dump in broad daylight out on the street. I really came to like Sing.'s policies after seeing how India and other countries treat filth.