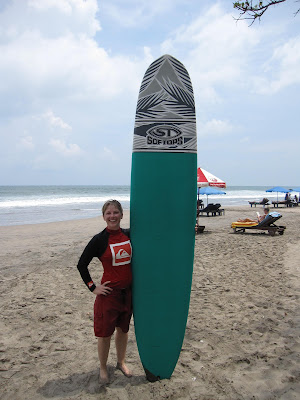 Yah!  You know it!  I finally got off my massage-getting, book-reading, new-friend-chatting, temple-visiting, fire-dance-watching, muscle-stretching, internet-surfing, around-laying butt and signed up for a surf lesson.  I had planned on spending all eight days in Bali learning how to surf, but all of the above just sort of got in the way.  Well.  Today I went!  And I stood up a buncha times!

First we had to put on a long-sleeved shirt and shorts in 198 degree weather.  Next we had to lay on mats and do some stretching and learning about how to enter the ocean and which way to point the board, etc.  Then we got to go out into the water, and basically 'boogie board' back to shore.  We would learn how to stand up later.  It was fun.  I have tried boogie boarding and it didn't really work and I never learned how to ride a wave.  This time though with a big fat surf board I was riding waves all the way home.  Shifting my weight, turning left and right.  It was a blast, but it sure takes a lot out of you.

So then it was time to take a water-drinking break.  So we all brought our boards up on to the shore and lined them up.  Mine wasn't quite lined up with everybody else's and so I picked up the tail end of it, and smooshed the nose forward.  Which caused a bunch of sand to collect and it didn't work.  My Balinese instructor shook his head and said:

"I am adult.  I can see *points to his eyes, then to the nose with sand on it* best way to move board.  I don't use my body to do something that can't be done."  Then he picked up the nose and moved the board.

He wasn't being insulting at all, but of course I wanted to die.

Later we learned how to Pop up! and then when we were in the water I totes did it.  Here the waves come every like 5 seconds or so and they were HUGE.  It was pretty rough just trying to get out far enough and decide which wave to ride in.  But I was told that in some parts of the world you have to wait 20 minutes for a wave and there are tons of people trying to ride it and it's pretty tough.  So in those terms Bali is probably a pretty good place to learn how.  I think it's a big surfing destination actually.

Oh, and I didn't think about sharks.  Not even once!  Take that, shark-fear!
Posted by A Lady Reveals Nothing at 9:06 AM

that is an enormous surfboard. I bet it was exhausting. Going from your stomach and then popping up to your feet a thousand times makes me tired just to think of it. Like 4 count burpies.

Oh yes. Good catch Sarah. That was NOT my surfboard. I just needed a photographic piece of evidence that I had been surfing and asked my buddy if I could pose with his. And I peed in those shorts in the ocean.

Get going on that Nancy- time is a wasting!!

Kady what is it, always with the pee???

How big is the guy who belongs with that surfboard?