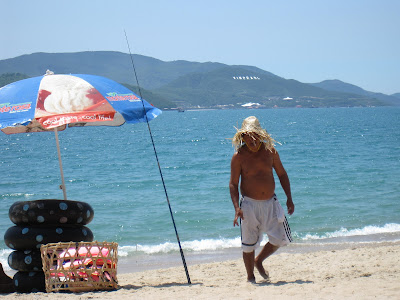 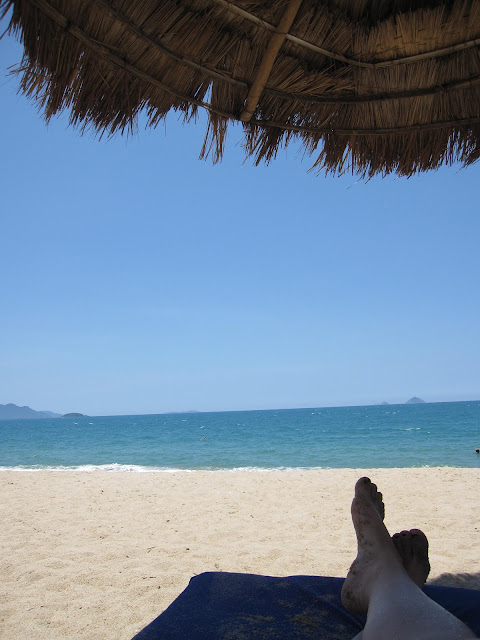 The best day yet. About four days ago, we had the whole day at the beach. The whole day. Our sleeper bus stopped in Nha Trang for 12 hours and we left our bags at the travel agency. There was nothing to do but lay on the beach. So we did. Under a thatched roof. We swam in the water which was the clearest water you've ever seen in your life. There was a huge dropoff right away and so the water was deep just like five feet from shore. I swam and swam and swam, but Summer swam some more.

At first, as I approached the water though, I saw something. Like poop. It was rolling around in the waves, never settling into the shore. Upon closer inspection it was a poop.  A turd.  A log. The man who rented us our beach chairs explained that it was in fact human poop. From the people who brought their kids to the beach. In total I found 8 human poops. The water was so awesome that I just avoided the poops. See how far I've come?

At about 4pm, the locals come to the beach. They are smart, because that's when it shades over and there is no sun. Thousands of people came and went swimming, right in their clothes. This is where I realized where the poop really came from and then I got grossed out. But anyways, there was a little boy, who had no hair except for long long bangs. He was with a woman who looked to me like a monastery worker, and she was also holding a baby. I assumed this boy was an orphan, and for the rest of the story let's just run with that assumption. She brought him to the water, and then sat down near Summer and me with the baby. He was scared at first, but eventually went in up to his ankles. Then he sat down, and started rolling around. He was smiling and having a blast. I was watching him, but his guardian wasn't. He kept looking up to her and smiling, hoping she could see that he was having so much fun. But she wasn't looking. Here he is all alone among thousands of people, splashing and loving it, wanting to be noticed, and only I am watching him. Tears streamed down my cheeks. 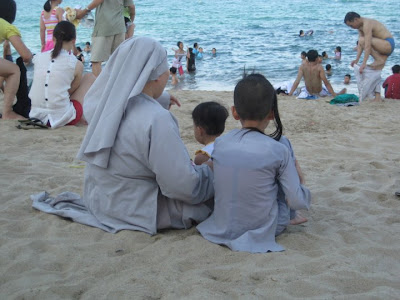 She could be just a normal lady and these were her kids, who knows? I'm dumb. But in those moments I imagined him coming home with me, helping me mow my lawn, getting me the remote control when it was just out of my reach...the usual mother-son loving relationship.  I'm joking of course.  I fell in love with this little dude.  It's gotta be the hair.  Mom and dad, meet your new grandson! 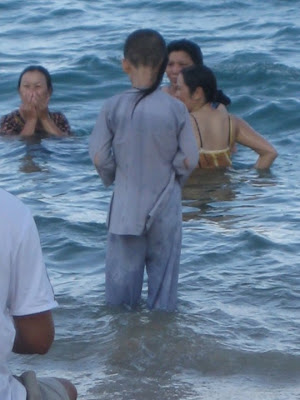 Posted by A Lady Reveals Nothing at 11:02 PM

I would love for that boy to talk to my girls and tell them how good they have it. Love, Jacqui