Summer and I had a hilarious misunderstanding today

Labels: hilarious, misunderstandings, poop, SE Asia
Summer is getting over some food poisoning, and is only able to stomach the idea of french fries for the last two days. So when we were on our little tuk tuk ride in Phnom Penh today, she mentioned if I saw any western looking restaurants I should let her know. We drove by a KFC, and I joked that she should get one of those new sandwiches where they replaced the bread with deep fried chicken patties. Then she said, completely out of the blue:
"Relax, underwear"

Which I took to mean that she was having a conversation with her underwear after having eaten the chicken patty sandwich. Like they were afraid, and she was going to comfort them. I started laughing maniacly and she looked at me like, 'it's not THAT funny', and then I was like, 'wha?' and she pointed to a billboard that had an ad showing a man in his underwear, and above it, it said:

The brand name of the underwear. This just proves Summer is usually not listening to me.  Also, for the rest of my life, whenever I eat something totally greasy, I will say, "Relax, underwear." 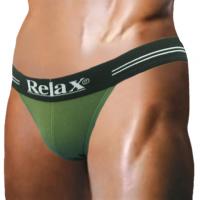 Posted by A Lady Reveals Nothing at 4:34 AM

Were you in down town Phnom Pehn? We were jonesing for KFC one day while we were there and paid our tuk tuk driver $5 to take us to what he claimed was the only KFC in that city. We had these amazing potato fries covered in a sweet sour cream and sweet nacho cheese. They were fatty and amazing!

If it was a tiny KFC in a great big building kind of on the corner, it was probably the same one.

Oh, and we read "First they took my father" as well. Picked it up in Siem Riep for a buck or something.

Hopefully we can get a beer at Shay Shay this summer. We'll be in around the 24/25th of July.