Labels: afraid, near death, SE Asia
This is from May 6th, so it's a while ago now, but I wanted to post it because it's about me facing my fears.  Something this trip is sort of about.  If it's about anything.  I decided if something freaks me out, I want to just do it and get it over with already.  If it's not going to totally make me die.  Like scuba diving, surfing, swimming in the ocean, being in dirty places and tight spaces.  I don't believe, for me anyway, that these fears can be "conquered" because they're still there, but I believe they can be "faced".

So anyways, eons ago, and even before the Vietnam War, Vietnamese people dug and maintained pretty elaborate tunnel systems beneath an area near Ho Chi Minh (Saigon) called Cu Chi.  They used these tunnels to escape the air raids from the US during the Vietnam War.  The Viet Cong soldiers pretty much lived in them for years.  But they are tiny tiny tiny spaces, and they had to be camouflaged pretty well in order to avoid detection.  So the entrances looked something like this: 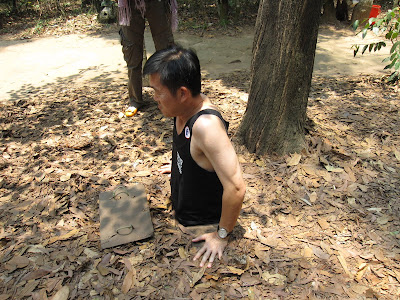 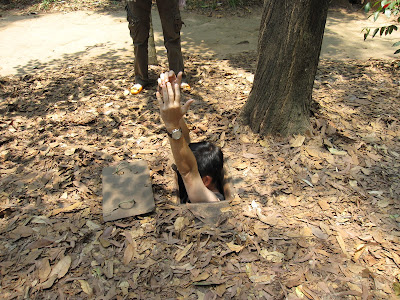 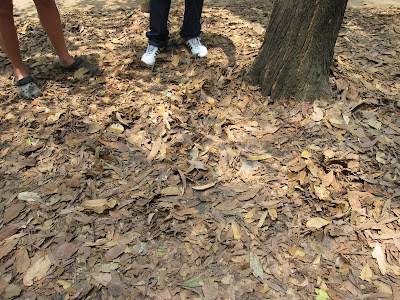 Somebody asked me if I wanted to go in that hole like the man above, and I said, "HELL no."

Here is another place where you can actually go inside one place and out another.  I decided to just get my photo taken only in the entrance, because I knew I would be too scared to go through the tunnels.  The first exit hole is only 20 meters away, or like 60 feet. 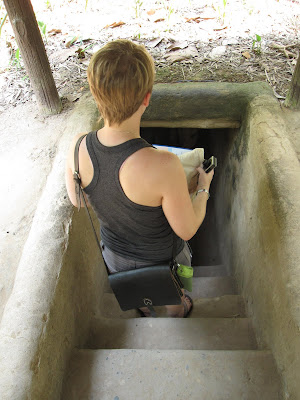 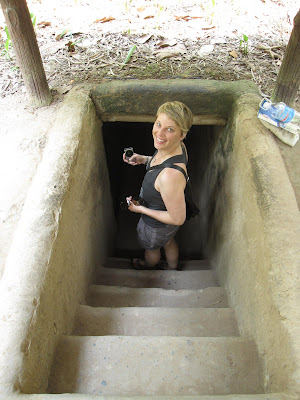 Please notice my face in this next one.  haha: 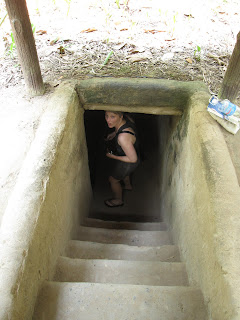 So, here I am, getting my photo taken.  The tunnel has been heightened and widened for the fat foreigners to be able to get in there, but I am squatting and I'm only 5'2".  All of the people went through and there was a space in front of me, and a lady went through and I heard her talking to Summer, who was already out the other end, and they seemed pretty close.  I had to just do it already.  I talked to Summer the whole time and did lunge/squats for 20 meters, running, in the heat, and freaked the whole time. 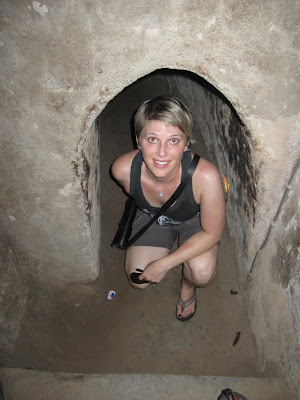 But I did it!  And Summer got a photo of me coming out the other end: 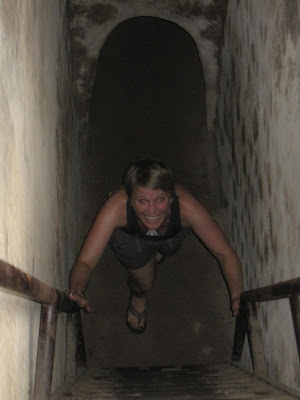 Thank goodness I didn't have to live in them to survive.  They go on for 2km, and some of the exits dump out into rivers...there are even boobytraps, because the Americans did find them sometimes and tried to go in.  15,000 people lived in the Cu Chi tunnels and only 1,000 of them survived the war.  I'm working off my memory on this guys, don't quote me and don't take this as some sort of history lesson.  Google it if you want more information.

As was to be expected, the 1967 film shown before you get to the tunnels is pretty anti-American, and uses such language as:
"Like a crazy batch of devils, the USA bombed riverside chickens, cows, and even innocent people."
"This American Killer Hero killed 16 Americans."
"This tool, normally used to hunt animals would now be used to hunt American Animals."
But what was most interesting is that it showed all the Vietnamese, so happy to be working on and living in the tunnels, that was where I was YAH RIGHT.

You can't help but imagine yourself in Vietnam during the war.  It looks so like every movie I have seen, and it's not so far advanced that you can't squint your eyes and rewind 40 years.  I kept thinking about the poor American kids who got drafted and sent over, who didn't want to be there, fighting the poor Vietnamese kids who were forced to fight, and didn't want to be there.  Pretty somber thoughts for a girl who then got on a bus and spent a day at the beach.
Kinda like the time I went to Dachau concentration camp in the morning, and Oktoberfest in the afternoon.
Juxtapose!
Posted by A Lady Reveals Nothing at 9:50 AM

Very interesting, I can't believe how small that little hole is and how completely it can be hidden. Yeah, I bet living in those tunnels for years was a blast.

Hey we needed a beer (and yes it called for quart(liter?)sized beers, and men rejoicing in song.) after visiting that place that was so terrible. It is bad enough seeing it in the movies, but to see it for real was very disturbing.