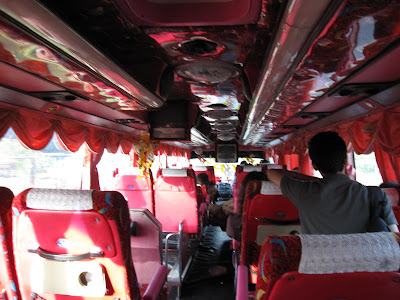 But thankfully, it did.  This one smelled so bad of urine and was decorated in what I like to think of a seedy honeymoon sweet on the outskirts of Las Vegas.  See photo.  The floor and seats were wet with air-conditioner drips and Dutchy kept accidentally stepping his bare foot on a wet rag on the floor.
After a three hour bus ride, we were dropped off at a bus station in Krabi town that wasn't a bus station at all.  It was a family-owned tour company with a monopoly on taxis and open-air shuttle trucks wanting to charge 500 BAHT for Summer and I to go 17 kilometers.  That's like $16.  "NO WAY!"  "ARE YOU KIDDING ME?"  haha
Dutchy was heading to his island via ferry, but the remaining German couple was heading the same way.  We asked for 400 BAHT for the four of us.  The lady said no, and "taxis don't run on water.  They run on gas."  Which made the four of us furious and just on principal we got our heavy bags and our tired selves right the heck out of there and started walking to what we thought was Krabi town in the 100 degree heat.  40 seconds down the road, a man on a motorcycle pulled over, made a phone call and got us a minivan to Noppharat for 300 BAHT total.  And this was because the stupid German guy agreed too soon without negotiating.  But whatever.  75 BAHT each.  And he accidentally gave us too many 20's back and before I knew it he had driven off and now we really only paid 280 BAHT.  ($9 US for four people.)  Here I am, probably discussing such matters with the Germans: 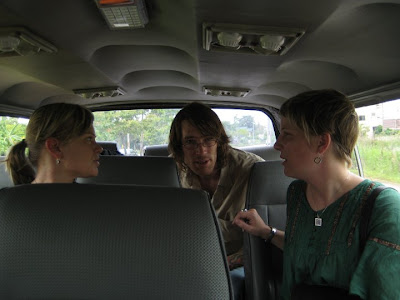 We found out that the Germans paid WAY more for their bus ride.  Another couple paid WAY less.  This is what irritates me.  We thought we paid a good price and finding out somebody paid less makes you want to rip your hair out.  And I felt so bad for the Germans, because not only did they get ripped off on their ticket, but when we got to the beach, their hotel didn't exist and they were given bad phone numbers.  So in the end, when Summer and I were dropped safely at our hotel and allowed to check in at noon and found free internet and slept all afternoon, we were just happy to be alive and safe.
That bus would be the last time we felt air conditioning for five days, save for a few two minute 7-Eleven trips and three Starbucks coffee stops.  This heat will melt your chapstick.  It will make you ugly.
Mosquitos will bite your face.  They will bite your eyelids and make you look like you got punched by a Muay Thai boxer.  They will bite you between your knuckes and make you look like you punched him back.
But, the view here!  It made it all so so so worth it. 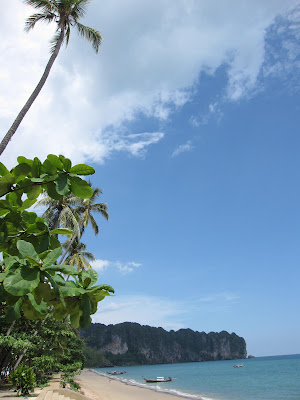 Posted by A Lady Reveals Nothing at 12:39 AM

I'm not quite as insanely jealous of your trip around the world now. Everything in this post (aside from the view) sounds like hell on earth. The mother in me is so glad you are not alone in Thailand.