Brandi and Grady drive us to end of their 45-minute bumpy gravel road at about 7:30 in the morning on Thursday, where we met our taxi drivers.
Taxi drivers bring us from Leon to Managua where I had my last Nicaraguan meal at Tip Top, which is Nicaraguan fine cuisine just like KFC.  You really can't leave Nicaragua without eating Tip Top!  Unless you're Josette, who had orange juice and did not get diarhhea.  I think.

Central American buses give you a seat number, kind of like they have on flights.  And this is awesome, when they overfill the bus.  It means you have a seat.  But jeez, people, when the bus is empty, you really can sit where you want.  I have had women go and 'tell on me' with the bus driver because I was in their seat, had the stinky fat man next to me NOT move across to the row next to us when it emptied (even though I begged and begged him inside my mind), etc.  Well on this bus I was seated next to a woman but all the rows behind us were taken, so I moved one row back to have two seats to myself.  I fell asleep.  Enter a stupid schoolkid, who WAKES ME UP from sleeping to show me I'm in his seat.  Irritated, I grab my crap, noisily move a row back giving him a look, like "ooh you're a big man. Why don't you just take any of these thousands of empty seats?!"  No worries, I'm snoring again in seconds.
Then a poor poor poor grandma gets on the bus, with her daughter and granddaughter and it takes a half hour because she BROKE HER LEG and was trying to get to a hospital in Costa Rica.  I mistakenly thought she was just extremely obese because of a jerky American sitting in front of me saying, "whoa she is really big. What were they thinking letting her on this bus?"  She wasn't really that fat actually, she just couldn't move because her LEG WAS BROKEN.  I had a panic attack on her behalf because somewhere during the 9 hour bus ride when she couldn't even get off the bus to go through the border with the rest of us, she tried to go to the bathroom but then gave up after making it only like three rows back.  Stupid American man tries to tell her daughter that the bathroom is too small for her.  So she had to go back to her seat where I imagined her peeing or pooping right there on the seat.  Later towels would be changed and I was sure it was for peeing or pooping but it wasn't, they were just propping up her leg.  I will never know how she made that whole trip without going to the bathroom, Pobrecita.

Arrive at airport at 9:45pm.  Ready to just sleep in airport.  Figure I have tons of internet time, since my flight doesn't leave until 7am.  WRONG.  No available wi-fi.  Good LORD.  I don't even know what airline I'm flying.  I just know I'm going to end up in Miami at some point.  Brush teeth, pinch every zit on my face, put on sweatshirt and fleece, take out towel and use it for blanket (always bring a towel when traveling).  First time sleeping in an airport, that I can remember.  Well, it sucks.  I can't sleep, there were no chairs so I'm on a full-on tile floor, worrying too much about getting ripped off.  Finally the morning comes, I figure out I must be flying to Mexico City to get to Miami eventually, change into jeans, get in the correct line, pay my $25 exit fee (ugh) and depart Costa Rica.

There was a Starbucks in the airport at Mexico City! STARBUCKS!  I was so excited I dropped $4.50 on a mocha!  And took a photo!

People ran past me and made such a ruckus that I followed.  Somebody told me it was Itati Cantoral, a famous Mexican actress.  Usually it's me the paprazzi is after, so I was glad to get a reprieve for once.

Arrive in the United States!  Kiss soil, as I have not seen the US for five months.  Pinch every zit on my face, brush teeth, wash armpits, read magazines! When you're out of the country, English smut magazines are a luxury only the very lucky can find and the very rich can afford.  Oh, the magazines!
Brad and Angelina are so happy! Jen Aniston has fungus fingernails.  Suri is given explicit toys to play with!  She's RIPPED from her bed at 1am for crazy dinners that Katie prepares.
Then an old lady fell down on the moving escalator.  But I was on the one running next to it.  I jumped! over to the one she was on and ran and ran to help her but by that time her stupid husband finally figured it out and slowly helped her up.
Flight delayed 4 hours due to weird fire on tarmack and we have to stop in Cancun Mexico to get GAS.  haha.  I pop a Xanex for just such an emergency as flying and wake up in Santiago.  Amaze-balls!  10 hours went by!  I must have been tired after all that Celebrity News!

Boring.  But check out the Andes!  Super gorgeous to fly over.  And I got my own row of three seats! Sleepy time!!! 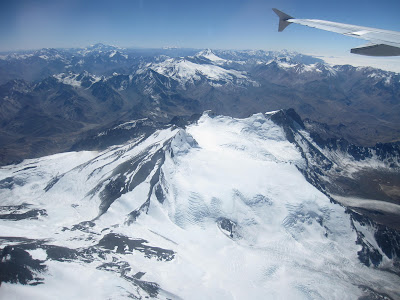 I finally finished Anna Karenina too!  Spoiler Alert: she dies.

I figure out my connection was screwed up because of the delay out of Miami, and they slowly take their time at the connection place to get me on the flight and I waited there for 40 minutes while a girl tried to ask each person what to do.  I am patient, infinitely patient, but I have somebody picking me up in Floripa, so I want to make this flight!  It's leaving in 20 minutes, people!  Finally they print me a boarding pass and tell me to run.  Which irritates me.  So I sort of jog.  I make it with plenty of time, and get picked up in Floripa by my fabulous friends Tadashi, Fabiano, Luciana and Maria.  60 or so hours.  To get from stupid Nicaragua to stupid Brazil.  But the flight was cheap man.


By the numbers:
6 flights (including stop in Cancun)
2 Xanex
1 bus
6 passport stamps
2 old lady emergencies
3 times getting a row all to myself
1 book
1 underwear change
0 showers
3 days
1 overpriced coffee
Posted by A Lady Reveals Nothing at 4:41 PM

Yeah, I'm not really a fan of amaze-balls.

Wow, you're a trooper chica!