Labels: afraid, embarrassed, irritated, Kady Stupid, South America
This story is really embarrassing and I don't want to tell it.  But as I always tell my dad, I'm a journalist blogger and I have to report the truth.

OK, so I left Florianopolis last night at 6:30 heading for Iguazu Falls, which is on the border of Paraguay, Brazil and Argentina.  More or less.  I was to arrive at 8:30 this morning.  So...something like 14 hours.

Some highlights of the bus trip:
Bus broke down, had to switch to new bus that stunk like must and mold.
New assigned seat was directly underneath a squeaky air conditioning vent that made a noise not even I could cope with.
Moved my seat, several times because people kept getting on and I kept being in their spot.
Finally went back to my assigned seat when bus filled up.

The sweet nice lady next to me offered me part of her blanket, I took a Xanex, or the poor man's equivalent (I can never remember the name) and I fell asleep for the night.  That lady would later inadvertently royally screw me over.

She elbowed me awake at 8am, and made a motion to move so she could get off the bus.  I hopped up, rubbed my eyes, grabbed my backpack and hit the bathroom.  After that I hailed a taxi and asked him to take me to Hostel Bambu.  He didn't know it, so I asked him for a pen and wrote it on my hand.  He was like, "yes, Bourbon".  I was like...NO.  "Bambu", but he was so sure of himself I decided to go with it.  Who knows?   Maybe they pronounce Bambu as Bourbon here.  What?  I was tired.  We drove all the way across town and arrived at Hotel Bourbon.  I was irritated.  $16 real ($10USD) and I wasn't even at the right place.  Ugh.  So I made him come into Hotel Bourbon with me to ask where is the Hostel Bambu, and maybe look it up on the internet.  As they were talking, it dawned on me.  I was not in Iguazu Falls.  I was in a different town.  I flashed back to arriving.  I didn't ask anybody if I was in Iguazu Falls when the lady elbowed me awake.

I started crying (this is the part I'm embarrassed about.)  I couldn't stop.  I tried to man up as I asked where I was, and how far from Iguazu Falls?  140 kilometers away.  I cried harder.  The taxi driver felt SO bad for me, and took me back to the bus station.  I had to pay him of course and by then it was $24 real ($15USD).  But he came in with me and helped me get info about the next bus to Iguazu.  Not for another 7 hours!  I cried harder.

Then I put my bags down and tried to stop crying.  I couldn't.  For what reason, I have no idea.  I guess I was just irritated at myself for such a dumb error.  I know better than this!  But -- I am not on a schedule.  I don't have to be anywhere until May 3.  Whatever!  'I am a laid back chilled out traveler' I kept repeating in my mind.  I decided to go for a walk.  I strapped on my bags again and walked by my taxi driver who said, "tranquilo" as I walked by, which means "calm down".  He meant it to be nice but I hate when people tell me that so I muttered something mean under my breath.

I walked and walked and walked and realized how stupid I was being.  In fact, I even got a little scared because the neighborhoods near bus stations are never good and I decided that if I got mugged and/or worse, how silly and ridiculous I would feel then for behaving this way over getting off a dumb bus too early.  So I stopped crying, marched right back into the bus station and found a new ticket on a different bus line for only $25 real and made it to the Falls no problem.  In total a $30USD / 2 hour mistake.  No bigs.


Look at this place.  What a dream: 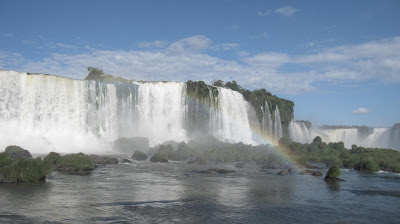 Posted by A Lady Reveals Nothing at 10:21 PM

I would have cried about the squeaky air conditioner. I would have lost my marbles if I got off the bus 140 Km too early. You're very brave.

To tambien, chica braza (or something) I did that once when on a train to Barcelona and I slept through the stop and ended up almost in Portugal in a town I still don't know the name of to this day. and I was with two people and I still cried. Waaaaaaa!

My daughter loved these falls too. Glad you made it to your destination. *shakes head in a fatherly way*