Labels: embarrassed, hilarious, misunderstandings, SE Asia, Summer
I thought cutting my hair would be a really good idea for my year-off-travel-the-world-adventure. I regretted it almost immediately.  The cut would be adorable if it were possible to have access to a shower in a real bathroom and a blow dryer and flat iron and styling products every day.


But that's just not the reality of it. Here's what usually ends up happening:


The fact is, long hair is just easier. You would think the opposite were true, but it's not. If there's no time, long hair can be thrown into a messy traveler's ponytail. Short hair just sticks up in every direction, and not in a good way.  And when you decide it's time to grow it out, there's no awesome consistent stylist to help you look good through the process.

A couple things have made all of this even worse:

As you can imagine, some assumptions are probably being made.  In Nicaragua, I was with Dustin, Ted, and Nicole. We were walking around pretty late in Granada, and we were pretty sure that we were offered a prostitute. Dustin said, "well, we guys probably do look a little desperate and Kady's haircut isn't helping."

While in Thailand, Summer had this to say (not entirely the fault of my haircut, but hilarious anyways):

"We saved 4 bucks a night by going with a fan-cooled room instead of air-conditioning. The fan was between two twin beds and the sound of it oscillating was unbearable. So we turned off the oscillation and pushed the beds together to ensure maximum fan-cooling. I may or may not have been guilty of knowing the fan leaned a full degree or two in my favor.

"We were awakened far too early by the housekeeper. I answered the door trying to cover myself up in my t-shirt with that blank look on my face one has at 8:30 in the morning when on a beach vacation. I declined any cleaning service and turned to survey the view the cleaning lady had just gotten- the highlights being: Kady lying languidly in a bed wearing not much more than a sheet... and a bottle of five dollar Thai rum at the foot of two twin beds awkwardly pushed together." 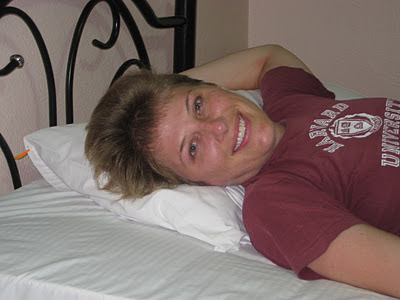 Click here for Summer's full story.
Posted by A Lady Reveals Nothing at 10:47 AM

I think you have great hair!

I would defend my "lifestyle" with this: "No I totally like boys! I like boys so much I only hang out with girls who look like boys!"

My other defense was, "Of course we like boys. My friend is OBVIOUSLY pregnant"

Summer is obviously referring to this other hilarious story:

(I'm referring to the story in the last paragraph.)

p.s. Thanks, Anne. You filthy stinking liar, you.

Ok I just posted the comment I meant for THIS thread on your post today. What!? I'm stressed out and sick.