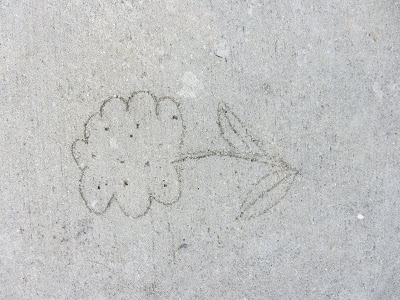 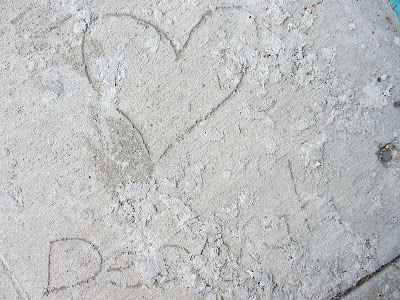 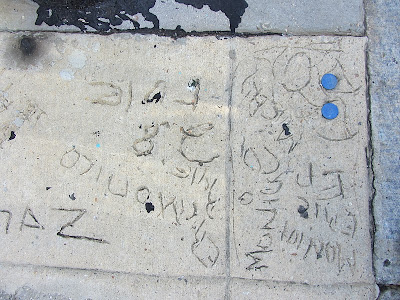 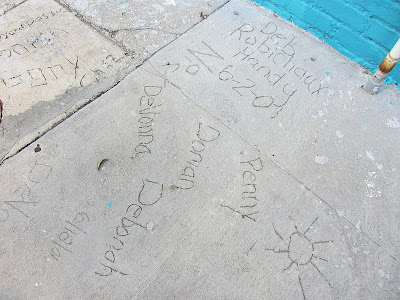 My mom says it looks like Lucy from The Peanuts wrote it.  I guess if you want something done right...you gotta delay your trip to New Orleans.
Posted by A Lady Reveals Nothing at 7:00 AM

You know, you're dad used to intimidate me when I was a low life high school freshman. But he was pretty nice to me. Great to hear these stories of Hal.

The REST of the story: And so Hal of course see this immediately, and right next to it lays a drill bit with cement encrusted in the tip. He thinks, "doggone it, How did I not catch her doing this?" Then he remembers Kady is in NOL. So Sam (the culprit) walks by and Hal asks him if the drillbit is his.
"Nope, that is yours!"
Hal, thinking: "Grrrrr...writing in the cement and now he used MY drill to do the deed!!"
So, Kady it was a neat prank and much fun...you missed the whole thing, and Sam loved giggling over it.

When I showed your dad your story, he could hardly look upon all the NOL cement grafiti....it truly pained him. Why does it feel so good to mess with his OCDs?

Dad, its Kelly. I love you. I don't know why they (Mom & Kady) want to do these kinds of things to you.

Oh shut up you brown noser.