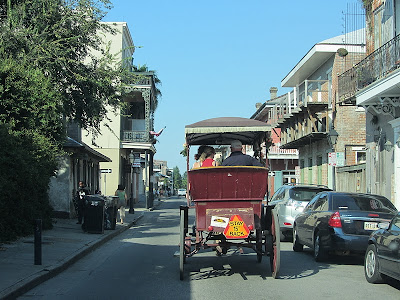 These stupid mule-driven tourist carts drive around the French Quarter all day long and all night long.  There are tons of them, and they are so annoying because they drive really really slow in order to explain every detail of the French Quarter to visitors for an exorbitant price.  Did you know that 75% of all wrought iron in the French Quarter was imported from France, and the rest?  Yes, it's made right here in the USA.  BORING.  You better hope you never get stuck behind one if you're in a hurry.  They also have no headlights or tail lights or concern for traffic laws.  It really makes you want to NOT "Stay Back 15 Feet".  In fact it makes you want to drive your car into the back of the cart and make the Minnesotans go flying.  (It's not their fault.  I love Minnesotans.)

A couple of Kady-isms have been inspired by this particular bane of my French Quarter existence:

Here's video of how ANNOYING THEY ARE.  It does not help that we live around the corner from Brad and Angelina (who get their house's picture taken at 0:16 and aren't even here right now).

OK.  I do love being able to throw garbage bags from our apartment down onto the sidewalk.  That's kind of the system here.  You just put a straight up garbage bag on the street.  And then, about three to four times per day, the garbage truck comes by and gets them.  What I don't like is the 'middle-of-the-night' pick up time because it wakes me up pretty much every night.  I stumbled out of bed at 2am to take this video of how LOUD it is.  And, during the day of course it's just one more irritating traffic obstruction (see 1:24 in the video.)  Also note at 1:31 how they just send the plastic bins flinging anywhere and they land where they land.  Summer and I have seen them careen into parked cars.  And when they fling the bags, the garbage juice goes everywhere all over the street, which is why you don't ever want to go barefoot like I did that one night.  *cough*

You can skip the middle part of the video, it's just a bunch of boring garbage juice being squeezed out of the bags by the squisher.  (One of my secret 'What-if' fears is 'What-if' I accidentally jump into a garbage truck just as the squisher comes down?)

During today's 5:30AM pick up, when I was still trying to sleep, I got to listen to them fight with each other about streets and boundaries and who was supposed to be where and who was stealing who's street.  The fight ended with a "YOU BETTER TAKE A RIGHT ON CANAL.  YAH.  RIGHT ON CANAL."

First off, I hate the whole 'Tall/Grande/Venti' thing, and refuse to be a part of it.  I always just order 'Small/Medium/Large' like a normal person.  But that's not why this Starbucks sucks.  This Starbucks sucks because they have the slowest employees I have ever experienced, and none of them know anything about coffee.  Here is an example of the conversation:

And of course I end up with a large cream with a half-inch of iced coffee, which prompted Summer to say, "75% of Americans think a half-inch is this big *demonstrates four inches with thumb and forefinger*.  I know this because I'm a hair dresser."

Also, I have never actually seen Paul Rudd's taller, cuter doppelgänger, and am beginning to think that Summer made him up.  Because, honestly, how can you get any taller or cuter than this?:

Seriously, every time we drive by this guy, run by this guy, or walk by this guy, and I mean it's like every day, because his little stand is just down Decatur, I just get really ANGRY.  Don't you think it's a little hot out for a wool hat?  I hate the beret.  That's right Jude Acers.  I Hate Your Hat.
I can't even talk about it anymore.

I also refuse to order a venti or grande or whatever-it-is-they-call small/medium/large, my sister in the struggle...

I knew I liked you, Brutal.