Labels: New Orleans, overheard, Serco
We live on a famous, busy street.  We are within walking distance of several French Quarter landmarks like Cafe Dumond and the Central Grocery.  As a result it attracts a very interesting crowd.  Everybody from gutter punks to old fashioned bums to skateboarders to tattooed riffraff to business people to obnoxiously drunk tourists to high school students on class trips to very old suave gentlemen dressed like stereotypical pimps from the 1970s using umbrellas for canes*.  And oh! the interesting characters we encounter!


Here are some overheads for you:

"He tried to kill me with a hunting knife.  And I was six months pregnant."


"You know my cousin Wendy a crackhead.  When I was growing up, it was like, you know, don't let Wendy in the house because she'll steal your TV."


"He whacked me in the balls with a bottle of vodka."

Here is my beloved Decatur street, as seen from my favorite $2 Martini Monday seat at Fiorella's Cafe.  In the photo you can see my new living room and my balcony and my bedroom.  I'm not telling which one in case you're a nut job.  Also to be seen is the nightclub next door to my bedroom, but I'm not telling which one that is either in case you're a nut job who knows how to tell what thing is next to what other thing. 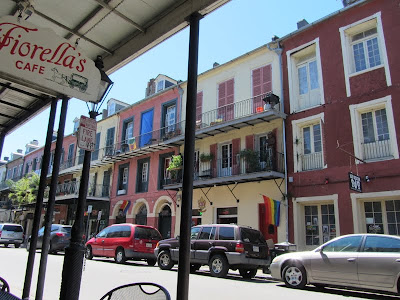 *I saw the "very old suave gentleman dressed like a stereotypical pimp from the 1970s using umbrella for cane" man again today!  His outfit wasn't as 'stereotypical pimp' as it was yesterday, when he was dressed head-to-toe in a maroon coattail suit complete a long thigh-length brocade vest and a feather in his cap.  Also today the cane was an actual cane (not an umbrella), but you get the point...I guess I took this photo to prove I wasn't making it up:

Posted by A Lady Reveals Nothing at 7:57 AM

You must meet that man! I think he would make a great blog..has to be a story there, plus I am sure he would just love you - Double bonus : )
LOL.
Amy F.

Are you sure he wouldn't be completely underwhelmed??

I can see it now..Kady goes bouncing up to the distinquished gentleman. He is perplexed..what is the cute and yet bizarre creature? He is quiet and "cool". What does Kady say..."Do you want to see the biggest blackhead ever?" Or "Where do you buy your pants?" Or "Are you Pimp-Daddy?"...
LOL - Just kidding!
Amy F.