Airlie Beach and the Sea Plane 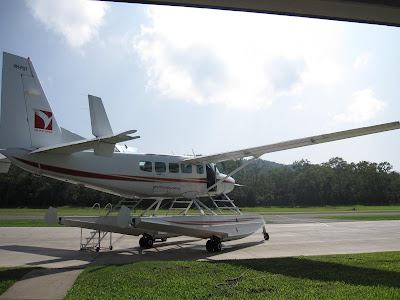 Suddenly I'm miss money bags and I'm booking things like sea plane rides out to the Great Barrier Reef.  I'm deciding that since Southeast Asia is going to be really really cheap (seriously, I found a 3 star hotel today for $14 per night) I can't keep stressing out about how expensive it is here.  Anyway, we took a cab out to the Whitsunday Airport, which turned out to be a little runway and a lobby with two couches.  Outside were two seaplanes just sitting right in front of the lobby windows.  I started to get nervous about forgetting my Xanex.  The ride was really pretty smooth though and the view!  Wow...

Notice anything about the pilot? 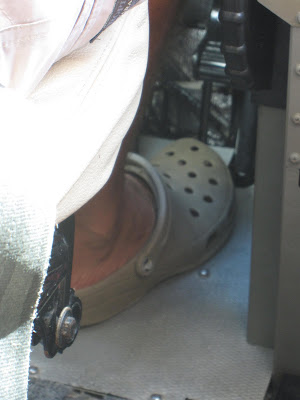 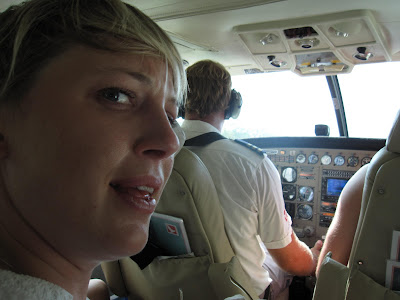 This is called the heart reef.  It's so cool!  It's pretty small and we looped over it a few times so everybody could get a good look: 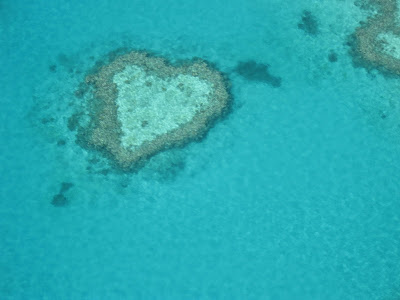 We did a water landing!  Some people that were with were going snorkeling on the reef and got dropped off at Reef World.  That was so amazing.  One time also we dipped down and skipped across the water for a while, but didn't land on it.  We were in the plane for an hour.  We flew over Hook Island, Whitsunday Island, Hamilton Island (which is where we flew into to get here) and then the reef.  I saw Manta Rays from the plane!  Swimming along, looking like they were flying under the water.  You could easily see them because they looked like big black diamonds.

At one point the pilot was sort of tapping/hitting one of the instruments to get it to work.  That and the crocs made me very nervous.  And then when it was all over, we got our picture with him and his back was very sweaty. 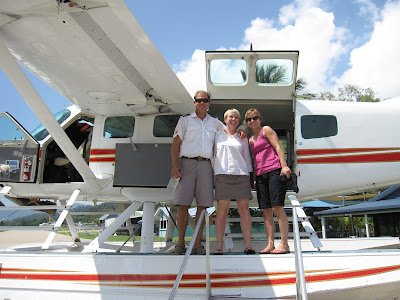 Posted by A Lady Reveals Nothing at 6:17 AM

Where are you going in S.E. Asia? You will save even more money if you don't book online. The most we ever paid was $25--which was always on the beach. Most everything outside of Singapore should run anywhere from $3 a night to $10/12 a night. We just used our LP guide and asked around and found our rooms on the ground... loads cheaper than booking. Sorry for sounding preachy, but your a backpacker, not a tourist :0)

not a tourist said...

What ain't right. Crocs are in the reef, Called Reefcrocs, and he flys a plane with floatation on each leg of the plane. They Always say Pilots take after their Planes. Who would laugh when the pilot starts walking to shore on the water. Not EEM i'ma bettin'