I found this to be slightly hysterical

Labels: Australia, hilarious
You know how sometimes you want to take a picture of a person because they're unique but you can't ask them because you're embarrassed and so instead you end up taking a picture into the air and hoping that the unique person is in the photo?  "Heh heh, just me, taking a picture of that door. *nervous laughter* "

That happened to me today with this dude who looks like maybe he was a monk?  I was so intrigued by him.  I am ignorant, so I'm probably wrong about the poor guy, but here I couldn't stop staring or taking pictures in the air around him.  He noticed me too and I'm sure my motives were obvious and exposed.  Anyways~ later on, we were pretty close to each other in the cable car going up a mountain, and since he's about my height I got a look right into his ear.

He shaves his head really close, but forgot about his TWO INCH LONG EAR-HAIR.  Ha!  Jokes on you dude.  So I took another picture into the air, and if you click on it, it will enlarge and you can maybe see the hair. 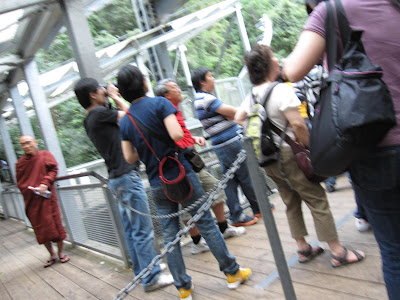 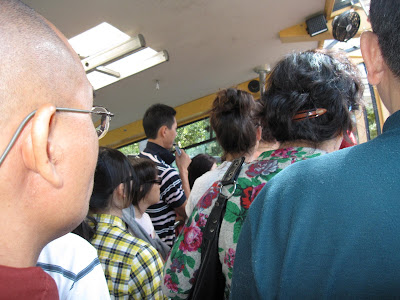 Posted by A Lady Reveals Nothing at 6:13 AM

taking pictures into the air! I love it! Hilarious! I do that too, I find someone who looks interesting and I want a picture or I like to draw them if they are in my class or something. But don't let people catch you drawing caricatures of them. That's awkward.

Remember Mr Monacle in England who was NOT amused nor fooled in any way about our intent?? And then we didn't even get the pic, after all!

Yep thats ear hair. I have a series of photos on my cell of a dude in starbucks with black pleather pants and a bandana on his head that says LOVE NOT WAR in purple carrying cheap gas station roses. I was sitting right next to him on sofa. First I got his feet, then tried reflection in mirror, then got his side profile and strangely just then he left.

Ha ha ha, you can see the ear hair.

i'm a nerd; but they shave their heads. however, they are proud of the wisdom long hairs from moles and other places (americans might find grody) shows about them.